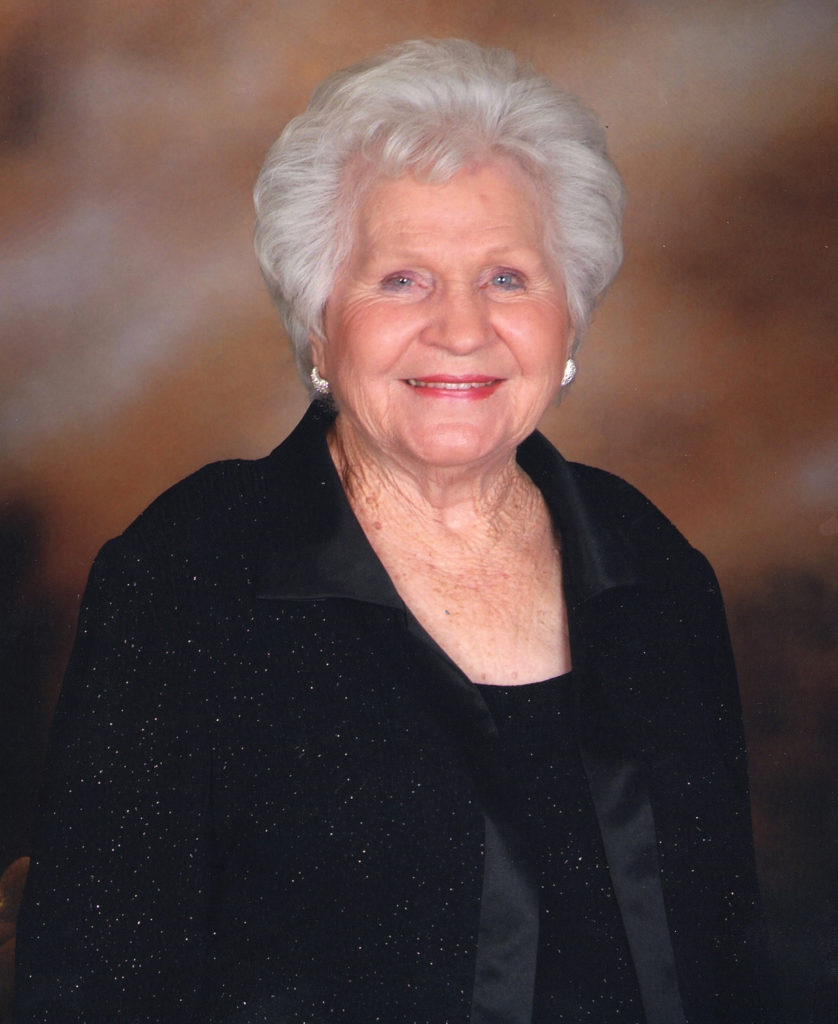 On May 7, 2022, after having lived 99 amazing years, Mary Theresalyn Phillips was reunited in Heaven with her husband, Bill, her parents, and her nine siblings.  Known as Grandma to her immediate family and friends, she is survived by her nine children: Cindy (Gene) Hoback, Judy (John) Mele, Mary Jane (Rich) Rafalski, Bill Jr., Bob (Diane), Teri (Maurice) Sanchez, Dan, Shari Vargas, and Anne Hiebert, as well as 26 grandchildren and 44 great-grandchildren (and counting).

Grandma was born in Perry, Missouri on March 6, 1923 to Pearl and Annie Graves.  Growing up during the Great Depression, she, her sister, and seven brothers entertained themselves with homemade toys and sports equipment.  She lamented that her brothers were allowed to play games that she and her sister were not, but she loved that she was allowed to play ball with them.

She married William (Bill) Phillips in 1940 when she was 17 and he was 19.  He impressed her with his whistling ability, much like the radio and recording star of the day, Elmo Tanner.  She loved dancing every weekend with her new husband during their first years as a married couple.  They looked forward to having children of their own.

Before they could start a family, however, World War II intervened.  Bill and six of her brothers enlisted in the U.S. Navy and fought for their country across the globe.  Not one to be left out, Grandma joined the Navy as well, but stayed closer to home, serving at the Naval Air Station in Ottumwa, Iowa.  While stationed in Ottumwa, Grandma often assisted on short flights between bases.  Once, an officer ordered Grandma to move a plane from one side of the airfield to the other.  Taught to always follow officer directives, she did so without telling the officer that she didn’t know how to maneuver the plane.  She ended up crashing into another plane on the ground.  The officer was grounded for two weeks, but Grandma was not disciplined, as she was just following orders.  The story entered family lore as “the time Grandma crashed a plane during World War II.”

Once the war was over and her husband and brothers all returned home safely, she and Bill started their family.  All nine of their children were born in Davenport, Iowa where they enjoyed playing with each other and their many cousins.  By 1962, Grandma had tired of the cold Midwestern winters and she and Bill decided to move the family to California.  They lived in the Sacramento area for a couple of years before moving to Santa Ana in 1964.  While in Santa Ana, her children grew up and began to get married and have children of their own.  Grandma was a long-time parishioner of St. Joseph’s Church, where she was part of the Altar Society and helped at the school.

Grandma began caring for her growing brood of grandchildren so their parents could work.  She continued to do so for much of her life, as taking care of her family was of utmost importance to her.  She enjoyed playing cards, bowling and teaching her grandchildren various games.  She also enjoyed occasional trips to Las Vegas, where she played the slots.  She was an avid Angels fan and later followed the Lakers closely, watching the games with her family and caregivers.

Bill passed away in 1982 on their 42nd wedding anniversary.  Grandma herself survived several brushes with death, having a brain tumor removed and eventually surviving three bouts with cancer.  She attributed her long life to her faith in God, not smoking (unlike many of her generation), and having a drink only on very rare occasions.  She prayed every day, never missing Sunday Mass.  Grandma also had an unwavering devotion to the Blessed Virgin Mary and recited the rosary daily.

During Grandma’s final year, she loved hearing that she was a good mother and that she was loved.  In her last days, some of her final words were, “I’m so happy, I love you all.”  We are certain that when Grandma reached Heaven, the Blessed Virgin Mary took her by the hand and guided her to meet with God, who congratulated her on a job well-done and welcomed her home.