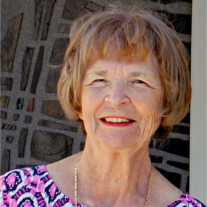 It is with great sadness that the family of Mary Schafstall Porter, a twenty-four-year resident of Laguna Niguel, announce her passing on the second of January at Pacific Shores at Laguna Hills.

Born on April 9, 1934, in Cincinnati, Ohio, Mary attended Ursuline Academy, a private girls school, in Cincinnati, Ohio, and received her nursing education from St. Elizabeth Hospital of Nursing in Dayton, Ohio, in 1955. Among her various positions, Mary worked at Granada Hills Community Hospital, initially as an Emergency Room nurse, and later as a nursing supervisor. After receiving her epidemiologist training, Mary took a position as the Infection Control Nurse at UCLA for 14 years.

In addition, Mary volunteered her skills at the Red Cross by teaching newborn classes, and she also admirably administrated the evacuation center for the Saugus earthquake of 1971. In later years, she volunteered for homeless food distribution programs.

Mary loved her family and friends, and gave generously of herself to her children, grandchildren, parents, sisters, in-laws, and beloved husband, and many others. She will forever remembered for her kindness and goodwill, and carried deep within their hearts. Mary will be forever remembered by her husband, William J Porter, Jr., daughter, Laura Porter Simko, and three sons, William J. Porter III, George Lambert Porter, and Clement Hill Porter. She will also be long remembered by her sisters, Winifred and Laura, as well as her son- and daughter-in-laws, Tom and Christa, and her grandchildren, Joey, Marissa, Sarah, Sara, Emma, Jackie, and CJ.

O’Connor Mortuary has been entrusted with arrangements for services and memorial gifts. A vigil will be held on Friday, January 12, from 5:00 – 7:00 PM. A Catholic traditional funeral mass at St. Edward the Confessor Church in Dana Point will be given on Saturday, January 13th at 11:00 AM, and will be immediately followed by the graveyard service.