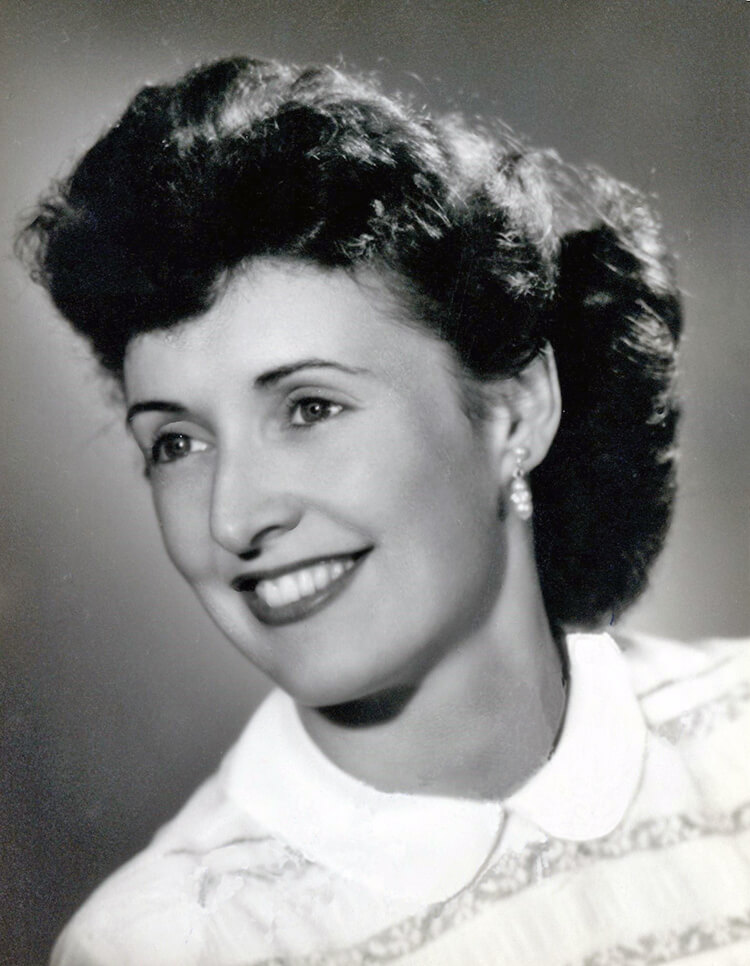 Mary Louise Baur, née Grevillot, died in her home in Dana Point on January 5th, in the company of her six surviving children, her extended family and her friends. She was 91 years old.

Mary was born March 5, 1926 in Sierra Madre, California, the eldest child of Prosper and Anna Rose Grevillot. After graduating from St. Andrews, an all-girls Catholic high school, Mary worked as an airline stewardess for TWA, and later worked for the FBI. In 1950, she married Alfons Baur in Inglewood, California, where they raised seven children. In 1970, the family moved to Garden Grove and later to her home in Dana Point. After the birth of her youngest child, Mary worked for 26 years in the Personnel Department at Sears Roebuck in Inglewood, transferring later to Laguna Hills, where she rose to become Personnel Manager. After retiring from Sears in 1991, she worked as director of the Christian Service Office at St. Edward the Confessor Catholic Church in Dana Point and dedicated herself to a variety of Catholic charitable causes.  She retired in her late eighties.

Mary was loved by everyone who met her.  Her home was the regular gathering spot for Thanksgiving, Christmas, birthdays and other holidays, where Mary selflessly welcomed many extended family members and friends as part of the family. Mary was always lighthearted and witty, and was at her happiest when surrounded by the people she loved. Even in her last days she expressed more concern for the needs of others than for herself.

Mary remained alert and independent until her final hours, succumbing finally to complications from cancer. She was preceded in death by her eldest daughter Therese Covey.  She is survived by six of her seven children: Linda Travers, Stephen Baur, Mark Baur, Christopher Baur, David Baur and Maureen Callahan, her four grandchildren:  Erin Covey, Kristen Owens, Matthew Travers and Kayla Baur, and her three great grandchildren: Garrett, Grace and Gavin Covey.

A Rosary will be held on Thursday, January 18th at 5:00 p.m. at O’Connor Mortuary located at 25301 Alicia Parkway, Laguna Hills. A funeral mass will be celebrated the following day, January 19th, at St. Edward the Confessor Catholic Church in Dana Point at 1:00 p.m. which will be immediately followed by a reception at 2:00 p.m. at St. Edwards Knight Hall, adjacent to the church. In lieu of flowers, the family appreciates any donations to The American Cancer Society.