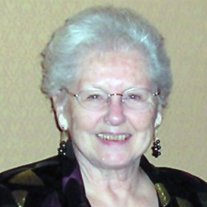 She was born Mary Rose Dicks on Aug. 6, 1928, in St. Paul, Minnesota. She was the third of six children of Joseph and Rose Dicks. After graduating from St. Joseph Academy in St. Paul in 1946, Mary went to work as a secretary for Pitney Bowes and rose through the ranks to become regional office supervisor at age 21, traveling extensively to assist new branch managers in multiple states.

She gave up her promising career to marry Army veteran James Edward LeMay on Aug. 5, 1950, in St. Paul, Minnesota. During the early years of their marriage, Jim completed his master’s degree.

In addition to raising seven energetic children, Mary managed to donate her time to various organizations. She became head of volunteers at Resurrection Hospital in Chicago and was a lay minister at Mary, Seat of Wisdom, in Park Ridge. She also counted the collections on Sundays after mass. Although she usually avoided the spotlight, many friends and family have vivid memories of Mary as a singer and dancer in Chez Paris, an annual musical revue fundraiser at the church. Jim and some of her children also sang or performed at the some of these events.

After their children were grown, Mary and Jim moved to San Diego, California, and later to Irvine where she was part of the first group of volunteers at Irvine Medical Center, which opened in 1990. The couple was active at Saint Elizabeth Ann Seton Catholic Church in Irvine, sometimes serving as a Eucharistic minister, reader or counter of the collections.

While in Chicago in 2010 for their grandson Matt’s wedding, Mary and Jim were surprised by a 60th wedding anniversary party thrown by their children. Many friends and family members from the Midwest attended the event, which included a slide show of photo memories and the family’s secret recipe Mahogany Cake.

Mary and Jim had moved to Regents Point retirement center in 2009. As her dementia worsened, Mary lived in special sections of the facility that offered the care she needed. Jim, her dedicated husband, visited her often and always brought a sweet smile to her face.

In addition to her four sons and three daughters, Mary had seven grandchildren and a great-grandson (born in September 2012). Although her family was spread across the country, they participated in a weekly online chat and gathered every few years for a reunion where her grandchildren marveled at Mary’s proficiency at “Uncle Norm Ball,” which consists of catching and quickly tossing a squishy ball to one another.

Mary loved to play bridge, work crossword puzzles and try to outsmart the contestants on “Jeopardy” and “Wheel of Fortune” (which she frequently did).

A very special person, Mary was beloved by her extended family.

In lieu of flowers, donations can be made to Lewy Body Dementia Association, 912 Killian Hill Road S.W., Lilburn, Georgia 30047 (www.lbda.org).