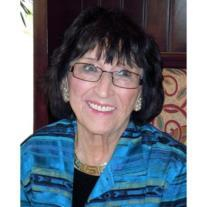 Laguna lost a bright star and true Laguna original on March 1 with the passing of Mary Jo Mancuso. She would have been eighty years old on March 6 of this year. Mary Jo was actively and energetically involved with a host of causes and organizations dating back to 1969, when the family first moved to Laguna, until a major fall-related injury in 2014 confined her to the hospital for most of the year.

Many Laguna people know that the Mancuso’s owned Giovanni’s from 1969 until 1984, and in that capacity, Mary Jo served as a surrogate mother and guide to many Laguna kids who worked at the store, either in North Laguna or the Main Beach location. She could often be seen sunning herself at Diver’s Cove on a Monday when the store was closed, or even sometimes in the middle of the day if it was not too busy!

As a multi-term president of the Soroptimists, and a member of Laguna Ebell, Mary Jo exerted a positive impact both locally and more internationally. She served on scholarship committees that helped many LBHS graduates extend their education. Through Soroptimists International, she supported women’s shelters, scholarships for retraining women, and the promotion of women’s rights internationally. Locally, Mary Jo was also a primary force behind Laguna obtaining the first “Jaws of Life” and K9 patrol. She was actively involved with TOW Neighborhood Watch and greatly enjoyed participating in disaster drills.

Mary Jo and husband John were also very involved with the local schools, whether T.O.W. or Thurston PTAs, or the LBHS Boosters. People may remember the many “Spaghetti Dinner” fund raisers at Thurston or for the LBHS Football team with food provided by Giovanni’s and Mary Jo and John.

Mary Jo also taught CCD for St Catherine’s in the 1970s, and was involved in the Women’s Council in more recent years. She and her husband sang in St Catherine’s choir for 25 years.

Daughter Stephanie stayed in Laguna and as her kids attended Laguna schools, Mary Jo became involved with the Girl Scouts. In that phase of her life of community service, Mary Jo oversaw the collection of not just One Warm Coat but by last count, over one thousand coats to be distributed to people in need.

To list all of the people, places and causes to which Mary Jo applied her creativity and energy would take another lifetime, because she lived each day in service to community. She was a bright, shiny star whose legacy lives on with four surviving daughters (Margaret, Stephanie, Susanne, and Joan) and their six children, and also, with all the thousands of children and adults whose lives she touched over the years in a lifetime of service.

A remembrance and space for sharing will be held at O’Connor Mortuary in Laguna Hills on Thursday, March 12 from 5 to 7 pm.