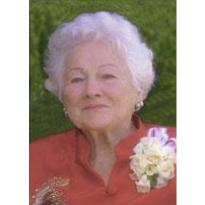 As a dedicated wife, devoted mother, loving grandmother, beloved great-grandmother and trusted friend, Mary Jane has shared her love for life and adventure, her refreshing humor and optimism, bringing joy to our family and community.

Born in Indianapolis, Indiana, on December 24, 1911, she was 94 years old at the time of her death. She moved to Los Angeles, CA when she was 8 years old and has lived here ever since.

Mary Jane was married to Wil Von Der Ahe, co-founder of Vons Grocery Company in 1934. She was constantly at her husband’s side as he developed the new concept of a Supermarket for the Los Angeles metropolitan area.

As a young mother, Mary Jane kept busy at St. Charles Grammar School, Notre Dame and Corvallis High Schools. She was active in the League for Crippled Children, Briarcliff Manor Needlework Association, Providence-St. Joseph’s Hospital Guild and was named the First Lady of the Western States Grocery Association. She was a Dame of the Order of Malta and a member of the Social Service Auxiliary since 1960 and was honored as a recipient of its Spiritus Award in 2004. Wil and Mary Jane supported numerous charitable organizations, most notably Loyola Marymount University, St. Charles Borromeo Catholic Church, Providence-St. Joseph’s Hospital and the Cathedral of Our Lady of the Angeles.
Mary Jane and Wil were married for 64 Years until his death in 1998. Mary Jane will be welcomed into Heaven by her loving husband and two beloved sons, Wilfred and Charles. She was dearly loved by many and will be deeply missed by her son, Tom and wife, Celeste; and her daughter, Tina and husband, Bill Brown, and her 18 grandchildren: Mareka and Mike Lodge, Jill, Josh Von Der Ahe; Charlie and Laura, Chris and Carolyn, Wil, Greg and Kecia, Peter and Sarah Von Der Ahe; Tom and Emmy, Tim and Kathleen, Geoff and Danielle, John and Amy Von Der Ahe, Kim and Brian Arial, Jennifer and Andy Van Tuyle; Kirstin and Scott Bundy, Heidi and Graham Hausler, Karl and Martine, Erik and Jeannine Brown. She was also blessed to have 33 great-grandchildren, with 3 more on the way: Hannah, Abigail, Kayla, Allison, Chad, Elizabeth, Grant, Lauren, Kristin, Brooke, Gregory, Olivia, Marlo, Tommy, Matthew, Megan, Chris, Katie, Timmy, Mary Jane, Geoffrey, Katherine, Will, Johnny, Jack, Ashley, Scotty, Luke, Mary Jane, Logan, Annabelle, Lily, and Mirabelle. Through them, the memory of her sparkling blue eyes and her continuous adventurous spirit lives on.