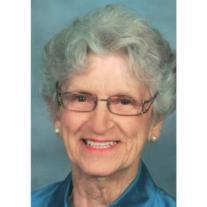 Mary Jane (Liz) Driscoll, 86, beloved wife, mother, grandmother, and GiGi passed away peacefully on May 1, 2012, in her home in Irvine, CA. She was preceded in death by her husband of 61 years, Gerry Driscoll, in September 2011; also by her brothers, Richard and Don, and by her sisters, Alice and Peggy.

Mary Jane Lister was born January 26, 1926, in Chicago, Illinois, to Timothy and Julia Lister. She was educated at Loretto Academy and received her degree in 1947 from Loyola University School of Nursing, St. Bernard’s Unit, in Chicago under the US Cadet Nurse Corps program. It was there that she was given her nickname, Liz, by her classmates. After graduation she and three classmates moved to San Francisco, where she met Gerry Driscoll, and the two were married in 1950. Liz worked as an RN in San Francisco and Sacramento before starting their family. She and Gerry relocated to Long Beach in 1953 and to Tustin in 1962. She later resumed her career as a hospital nurse and eventually as a nursing instructor until her retirement. Liz had a passion for reading and sewing and she enjoyed music and old movies. She loved being outdoors and camping with her large, loving family and friends. She will be remembered most for her devotion to her family, her courage, and her wit.

A Rosary, Eulogy and Funeral Mass will take place Monday, May 7, 2012 at 10:30am at St. Edward the Confessor Catholic Church in Dana Point, CA.

In lieu of flowers, please consider a donation in Liz’s name to the Wounded Warrior Project at woundedwarriorproject.org.