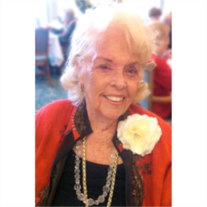 Noted local artist Mary DeFranco passed away peacefully Sunday morning May 21st at her home in Laguna Niguel. She was 91 years old. Mary was born in Los Angeles on February 1, 1926 to Josephine Follis and Leonz Herz. She resided in Southern California her entire life.

Mary married Victor DeFranco on June 15,1952 and they resided for many years in Northridge where they raised their three beloved daughters, Joanne, Gina, and Jane. They later moved to Orange County and were among the first residents of The Hunt Club in San Juan Capistrano where they lived until Victor passed away in 2012.

Mary was an accomplished painter working in oils and other media. She was also a skilled seamstress and designer. After she graduated from Chouinard Art School in Los Angeles she was employed by MGM Studios as a designer and costumer. One of her proudest achievements during that period was the spectacular shimmering dress worn by Glenda (the Good Witch) in the movie classic The Wizard of Oz. Mary sewed all the beads on the entire dress by hand. She also was employed by Hallmark as a card designer and painter.

During the Northridge years she taught painting to countless people from her home studio. Later, for nearly 25 years she owned the Mary DeFranco Gallery in Laguna Beach where she painted and sold oil paintings to visitors from all over the world.

Mary is survived by her three daughters, Joanne Astle of San Diego, Gina DeFranco of Laguna Beach, and Jane Lippman of Laguna Beach; two sons-in-law, Mike Astle and Doug Lippman; and four grandchildren whom she adored and doted on, Nick and Suzy Astle and Tom and Taylor Lippman.

For many years Mary was an active parishioner of The Mission in San Juan Capistrano and was always the first to offer assistance to anyone in need.

Funeral services will be held on Saturday June 3 at noon at St. Timothy’s Catholic Church in Laguna Niguel. A reception will be held immediately following the service at nearby El Niguel Country Club for those attending the service.

Interment will be at the Miramar National Cemetery in San Diego with her husband Victor. As an animal lover, Mary asked that in lieu of flowers donations in her memory be made to a local animal charity such as Animal Samaritans in Thousand Palms, CA.