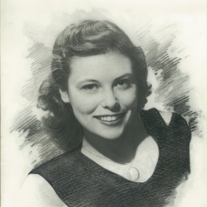 Mary Elizabeth (Betty) Wagner, 89, passed away peacefully on December 15, 2017, at her home in Rancho Santa Margarita, California after a short illness. At the time of her death, she was with her husband, Jack, and surrounded by many children and grand-children.
Betty was born in Pontiac, Michigan on September 5, 1928 to Clarence Columbus Thompson and Dorothy Lee (Kimball) Thompson. Betty, the third of five children, attended Mount Mercy Academy in Cedar Rapids, Iowa and the University of Iowa. At the University of Iowa, she joined Kappa Kappa Gamma sorority and graduated with a Bachelor of Arts degree in History. While at Iowa City, Betty met a young law student, John Emery (Jack) Wagner, and they fell in love. After receiving their respective degrees, on November 10, 1951, Betty and Jack were married at All Saints Catholic Church in Cedar Rapids. Following the ceremony, the couple moved to New Jersey where Jack had accepted a position as a Patent Attorney at Bell Laboratories. Betty and Jack had six children in seven years – three boys and three girls. After residing in several New Jersey towns, as well as living for a time in New York (Staten Island), the growing family moved to California in 1959 where Jack had accepted a position as Patent Counsel for a company in the burgeoning West Coast aerospace industry. Five more children followed – two sons and three daughters – bringing the total number of children to eleven which, according to Jack, was one shy of their goal! The large family eventually settled in Glendale, California where they lived in the same home on Montecito Drive for more than 50 years. Betty and Jack moved to Orange County in 2014.
Betty wore many hats during the family’s time in Glendale. She was not only a wife and mother, but worked side-by-side with Jack when he opened his own patent law practice in the early 1970’s. She participated in local politics and promoted reading (one of her passions) by working with the Great Books programs in her childrens’ school. Betty was also active in many service organizations over the years, including the National Association of Retarded Children (ARC), Lawyers Wives of Glendale, Boy Scouts of America, the Girl Scouts, the American Field Service Student Exchange program (AFS), and her beloved Kappa Kappa Gamma sorority. Betty served as president of the local chapters of ARC and AFS and was a member of the Daughters of the American Revolution (DAR). Even with eleven children keeping her very busy, she always had compassion to spare and opened up her home repeatedly through the years to those in need. She welcomed every new adventure, traveled extensively, and encouraged her children and grandchildren to do the same. Betty even co-owned and operated a travel agency for ten years with her dear friend, Lucianne Bell, in order to facilitate her and Jack’s lifelong love of travel. Throughout her life, Betty consistently and tirelessly promoted and encouraged education.
Betty is survived by Jack, her devoted and loving husband of 66 years, and ten children: John Patrick Wagner (Debra), Theresa Ann Middlebrook (James), Nancy Walsh Baker (Dennis), James Thompson Wagner (Joan), Mary Ellen Blakey (Christopher), William Joseph Wagner (Denise), Barbara Marie McAndrews (Thomas), Margaret Mary Lee Stratford (Kenneth), Christopher Robert Wagner (Gary), and Dorothy Elizabeth O’Donnell (Sean), as well as two AFS daughters (Juliette and Maria). Betty is also survived by 24 grandchildren, 10 great-grandchildren, twelve nieces and nephews, and a brother, Richard Lee Thompson (Joanne). She was preceded in death by her special son, Thomas Edward Wagner, two brothers, Clarence Carl Thompson and Eugene Kimball Thompson, and a sister, Dorothy Lee Pierson.
Services will be held on Wednesday December 20, 2017, at Holy Trinity Catholic Church in Ladera Ranch, California. A Rosary and brief Visitation will commence at 9:00 a.m. immediately followed by a Funeral Mass. A reception in Huntington Beach will be held afterwards. The family will hold a private interment at Good Shepherd Catholic Cemetery in Huntington Beach, where Betty’s parents and her brother, Eugene Thompson, are also interred.