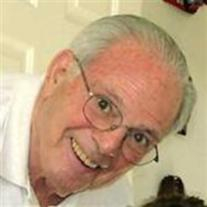 A husband, a father, a grandfather and ‘Grandpa the Great’ (his moniker for great grandpa); All in the name Marvin E. Shiffman.

Marvin E. Shiffman (he always explained that the E stood for Efficient) was a determined, strong goal driven man. Many looked up to him, and he will always remain in our hearts as a great mentor.

A native of Ohio his goal was to achieve the American Dream. World War II Naval Flight Instructor, businessman, Vice-President of Progressive Insurance Company and Founder/CEO of Leader National Insurance made Marv Shiffman the man he was.

Marvin had a very fulfilling 93 years of life. He had many life experiences, and he loved to share many of his life stories both written and verbal with those close to his heart…one never grew tired of listening to all of his tales. Never.

If you would like to give a charitable donation in Marvin E. Shiffman’s name please visit the website www.parkinson.org.