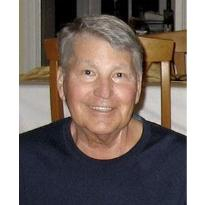 Martin Gregory ‘Marty’ Russo passed away on February 4, 2009. He was born in New York City on January 17th, 1936 to Marguerite Jean and John Russo. He spent his childhood in Hillsdale, NJ until he left for the Carolinas, California, Japan and Korea where he served in the US Marine Corps. Marty studied Art at The New York Phoenix School of Design, Pratt Institute NYNY, Art Center College of Design, Los Angeles and graduated from CSU Fullerton with a BA in Geography.

In September 1958, he departed New Jersey on his honeymoon with his bride Peggy Erdman and traveled to Orange County, California where he remained to raise a family, build a career and enjoy a great community of friends. He began his drafting career with The City of Santa Ana and soon thereafter joined a small group of young people venturing to develop the planned community of Mission Viejo. He served as Director of Community Services at The Mission Viejo Company and retired after 30 years. His involvement in the community extended beyond his professional role as demonstrated by his long and enthusiastic participation in the MV Activities Committee and his residence in Mission Viejo for over 40 years. His second career was born of his passion for woodworking when he began a small enterprise designing, building, refurbishing and refinishing furniture. His woodwork gave him great joy and an outlet for his artist gifts. He returned often to New Jersey to enjoy family, dear friends and his love of the woods.

Marty was an avid Angels baseball fan, birdwatcher and fisherman. He loved Jazz, chocolate, MGD and swimming in the Pacific. Marty was a proud Marine and patriot. He was deliberate and discerning, hardworking and persistent.

Marty is survived by his wife of fifty years, Peggy; his daughters, Gail Russo-Larsson and Jill Russo Bergman and their spouses Theo and Michael respectively; his grandchildren, Nicolas, Mattias, Liliana and William; his sister Jean Hartwick; 2 nieces and 2 nephews; sisters/brothers-in law, Mary and Harry Pantoja, John and Joan Erdman. He is preceded in death by his parents and brother Donald.

Marty will be remembered for purposefulness, generosity and his silly grin.