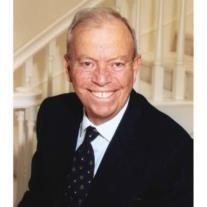 Marty was born in Los Angeles in 1928 to Martin and Celeste Whelan and was the younger brother of Patricia Welch (deceased). He graduated from Loyola High School in 1945, Santa Clara College in 1949, and Loyola Law School in 1951, and passed the California Bar Exam at age 22. After serving in the US Army’s Judge Advocate General Corps, he practiced law in Los Angeles and, from 1959 to 1982, in Whittier. He was president of the Whittier Bar Association, was elected to the first board of Whittier Junior College (Rio Hondo College) and was an active member of the East Whittier Rotary Club. He had a business law practice where he earned the reputation of being a brilliant attorney. For three decades, he was general counsel of the Water Replenishment District of Southern California and represented numerous water districts. In his retirement years in Newport Beach, he served as a Eucharistic minister at Our Lady Queen of Angels Catholic Church and enjoyed many bridge games at Big Canyon Country Club, where he was a member.

The Mass of Christian Burial will be at Our Lady Queen of Angels Catholic Church, Newport Beach, on Saturday, September 26, 2015 at 11:00 A.M. Donations may be sent to Boy Scouts of America, Orange County Council (www.ocbsa.org) or to your favorite charity.