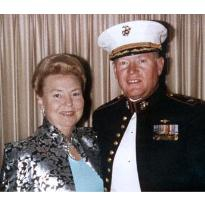 The month following the Japanese attack on Pearl Harbor, Marshall graduated from high school in Long Beach, California and promptly went to sea in the engine room of a Merchant Marine oil tanker. Shortly after his 18th birthday on 20 June 1942 he was accepted for Naval Flight Training and upon completion was commissioned a Marine Corps Lieutenant. He was with Marine Fighter Squadron 314 flying F4U Corsairs from Okinawa when the war ended.

In 1948 Lt. Austin was one of the early USMC pilots to qualify in jets by flying the TO-1 Shooting Star. During the Korean War he flew F9F Panther Jets with VMF-311 and was awarded the Distinguished Flying Cross for heroism. Other highlights of his career included F4U carrier operations, four tours of duty as an instrument flight instructor, Aide to the Asst. Secretary of the Navy for Research and Development. He commanded Marine Fighter Attack Squadron 542 when it first received the F-4 Phantoms in 1964-65. He has flown more than fifty different types of military and civilian aircraft.

In addition to various military schools Colonel Austin has a Bachelor of Science from the University of Nebraska and a Master Degree from CSU Long Beach, California. He also holds a Commercial Pilot License with an instructor rating. After military retirement he taught Industrial Education for ten years. He was also actively involved in the restoration of vintage aircraft at the MCAS El Toro Museum.

He is survived by his son John and two married daughters, Gale Ann Henderson of Flagstaff, Arizona and Linda Milnikel of Haleiwa, Hawaii; 5 grandchildren and 10 great-grandchildren. Marshall and his wife Virginia were married for 63 years prior to her death in 2007. Marshall requested her ashes be enclosed in his casket for interment alongside their youngest son Alan at El Toro Memorial Park, Lake Forest, California.

All services will be on Saturday, May 29, with a visitation from 8:30-9:30 am at O’Connor Mortuary, Laguna Hills; burial at 11:30 am at El Toro Memorial Park in Lake Forest, followed by a memorial service at 1:00 pm at Unity Spiritual Life Center, 22911 Mill Creek Dr., Laguna Hills.