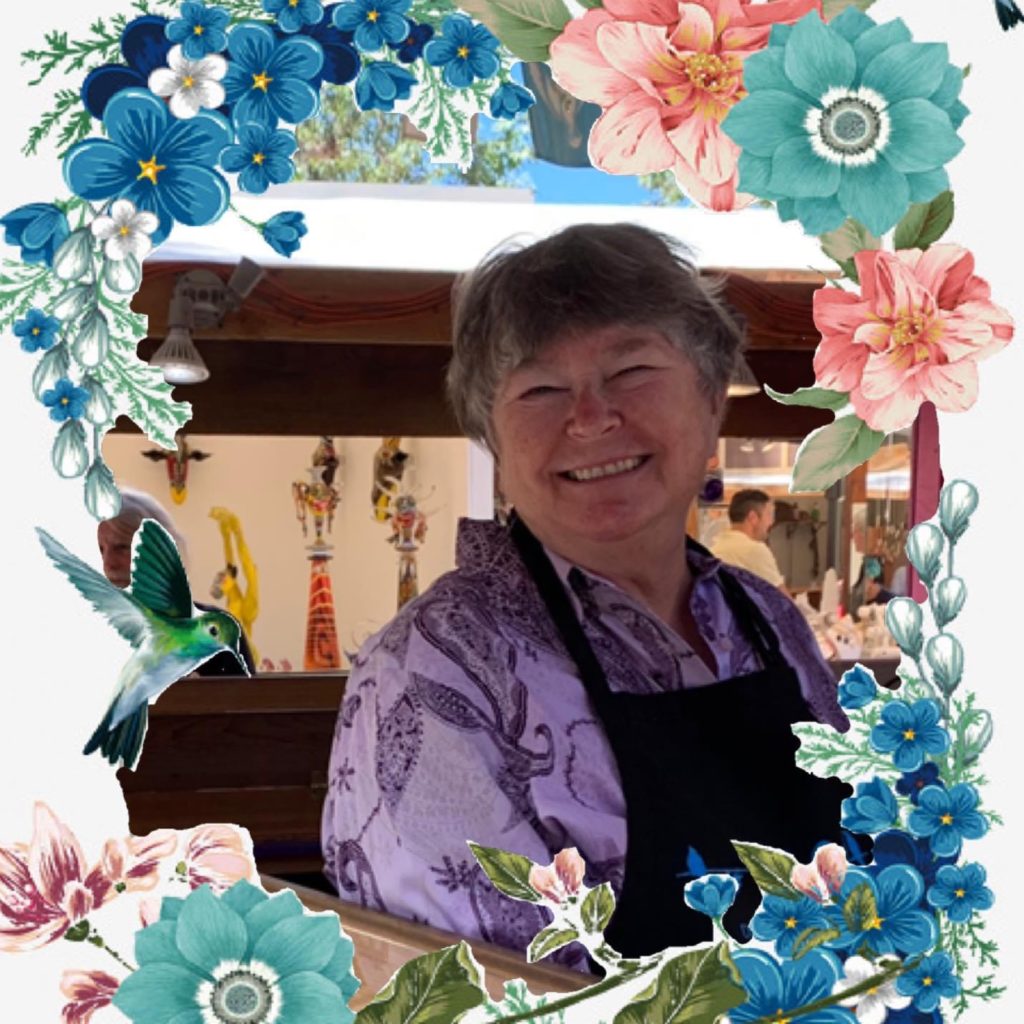 On Saturday, July 18, 2020, a beautiful spirit departed this world to join her beloved spouse in a far gentler place. Her name is Marla Burns, and her passing will never be forgotten.

In the famous lyrics immortalized by Andrew Lloyd Weber’s Phantom of the Opera, “Think of me, think of me fondly, when we’ve said good bye. / Remember me, once in a while, please; promise me you’ll try,” Christine makes a desperate plea: do not forget me!   For us, Marla never needed to do so.  Each day of her inimitable life, she made it impossible for us to ever forget her” or to ever stop loving her.

For all who knew and loved her (and you could not do one without the other), Marla has always been completely unforgettable. Ask any one of her legions of friends, colleagues, associates, students, neighbors, fans, and they will all agree.  Marla was, for them, probably the most genuine, authentic, creative, loving person they had ever encountered in their lives.  A brilliant teacher, writer, artist, silversmith, animal lover, humanitarian, community leader, and social activist, she remained” to her last moment” a person of complete integrity, incapable of uttering an unkind word or inflicting even the slightest insult or harm on any person or on any living thing in the Universe.

But, for all of that praise, do not be lured into seeing her as a colorless icon with no spirit or pizzazz.  On the contrary, she was a force of nature, dazzling us with her adventures, exploits, and wild accounts of the same. A gifted storyteller, she managed, somehow, never to seize the spotlight for herself or to push anyone else aside.  She never was a braggart or a scene stealer.  Yet, we knew well her knack for sneaking a sly, rogue comment, perfectly timed, into a conversation.  We saw her delight in serving up a slightly off-color joke or a wickedly risqué gift, with just the right hint of scandal. Marla could have invented the word “glee,” her color palette a profusion of deep purples, hot pinks, and icy blues.

For our Marla, every dawning day marked the chance to discover or create another opportunity to live joyously in the world and taste its sweetness.  Whether she was barreling down Pacific Coast Highway in her SUV, jamming her favorite tunes—or leading class discussions with her red-framed reading glasses perched on the tip of her nose–Marla did everything with energy and humor–and in her own distinctive style.  With her dear Georgette, she swam, hiked, surfed, skied, and explored the world.

She effortlessly dazzled us with her zesty approach to everything in her life—work, friendship, love, art, play, social justice.  Her brilliant teaching inspired students to think deeply.  She invited them to question old norms and help create a more diverse society, where all were respected and loved.  Her lessons stressed the aesthetics of language and literature, but, also, the power of clear rhetoric to effect real change. Marla’s contributions to Cerritos College were immeasurable, her work, deeply thoughtful.  It was clearly designed to benefit others, never herself.  Her office door, as well as her heart, was always left open.  To no one’s surprise, students flocked to her for help.  Quite simply, they adored her.

Altruism was at the core of all that she did, perhaps best demonstrated by Project Love, a venture she (and Georgette) created and, then, sustained for decades.  Its purpose was to provide Christmas gifts for impoverished Native American children at the Little Singer School in Arizona.   Each fall, Marla and Georgette would re-launch this huge project, soliciting contributions from co-workers, friends, businesses, and the local communities.   Marla yearly threw a reception in her office, luring donors with homemade cupcakes and punch, the chance for them to hand-pick their “children,” a built-in bonus for attending.

Together, Marla and Georgette spent hundreds of their own dollars each year, shopping for, buying, and wrapping “extra” gifts so that no child would be “left behind.” Often, they would make the long journey to the reservation themselves. They needed to make sure the coveted toys, dolls, and art supplies were delivered directly to those sweet children, so hungry for some brightness in their lives.  They spent their lives quietly showing they cared.  Discreetly. Humbly. They simply radiated love.

Reflecting on the loss of this noble woman, one can feel easily feel frustrated.  What are the best words, the right words, to do the job? Like baggy pants and sloppy sweatshirts, none seem to fit just right. Perhaps a few lyrics from The Sound of Music, can help out.  Friends will recall that Marla participated in the annual “sing-along” of that musical at the Hollywood Bowl.  Puckishly, she insisted on her own form ofcosplay, wearing a nun’s habit, complete with veil and prayer book. There she would eagerly climb the stage and belt out the songs, Marla-style” in other words, with complete exuberance and total abandon.

Most people remember the lyrics to “How Do You Solve the Problem of Maria?”  from that movie.  They capture the lament of Sister Superior, a cloistered nun who is perplexed by her young recruit’s (Maria’s) refusal to conform to convent rules.  For her, Maria is far too spirited, a rule-breaker who refuses to be tamed.   “She climbs a tree and scrapes her knee . . . and underneath her wimple [veil], she has curlers in her hair.”  Bottom line: this babe refuses to be tamed.  She’s gotta go.  Not convent “material.”

That image” of a fiery, spirited, independent young woman, determined to live life freely and refusing to bend to senseless, suffocating authority” fits our “Maria” to a “t.” Respectful and dignified, Marla lived life fiercely and honestly, from start to finish.  She took on each day with energy, spirit, conviction, and, most of all, a robust, let’s say, “earthy,” sense of humor.  She refused to succumb to the pressures of the world” to be stuffed into the narrow boxes prescribed for her by people with less vision.

An artist and creator to the core, she carved out her own identity as a proud gay woman” no easy task now, but even tougher in the 1960’s, ’70’s, and even ’80’s, when “gay rights” was, for many, an alien and even threatening term.  But she always knew, deeply and certainly, even in her earliest days, growing up in Hollywood, who she was, whom she loved, and how she hadto live her life.

As a result, Marla made bold choices and stuck with them.  She found the love of her life in Georgette” and created a completely committed life with her for a solid 47 years, despite the opposition they faced. Together, they quietly advocated for social equality and gay rights” and, notably, became two of the first gay women to be legally married in California, decades ago.  They did so quietly, without publicity or fanfare, despite the media awaiting hungrily for them, outside the courtroom door.

That historic moment, significant though it was, symbolized a much deeper stream of human caring and compassion that defined her life, as well as Georgette’s.  Both gifted English teachers deeply committed to their profession, they devoted their energy, talents, and financial resources to improving life on this planet, however they could.  No glory, just guts.  It was just what they did.

Together, they were fierce advocates for a range of human causes, including social justice, animal rights, and respect for the environment.  They worked together to make the world a kinder, gentler, fairer place, advocating for Native Americans, women in prison, the elderly, the homeless” or even for aging cats on the verge of retirement.  They brushed shoulders with famous folk, such as Jimmy Carter, Joan Baez, Janis Joplin, and Ellen DeGeneres.  Friends rarely knew of these encounters; their focus was on the work, on making a difference for those in need.  No fame, just gain. Boasting was not an option.

On the home front, these remarkably gifted women (and they were inseparable), contributed immensely to the Laguna Beach arts community.  On the front lines of establishing the Sawdust Festival, decades ago, they nurtured the organization from infancy to its current, vibrant state.  Each year they hand-built a booth on the festival grounds, ancient artisans staking their claim to the Earth.  There they offered their gorgeous jewelry to the world.  Did they not know that they were, themselves, the gems?

That spot, now hallowed ground, speaks volumes to their memories.  It is a monument both to their huge talents and to their commitment to Laguna Beach, the hometown they so deeply loved.

Sadly, time marches on . . . and the Sawdust Festival, the City of Laguna Beach, even the mighty waves of the Pacific fringing their town, will roll on.  But Marla (and her dear Georgette) have created a glorious mark upon the memory of the world, an indelible impression that can never be erased.

Like the nun in the movie, who wonders, “How do you hold a moonbeam in your hand,” our deepest wish is to hold these beauties tight, to keep them close, to never let them go.  But we cannot.

Instead, we must now share them with the Universe, twin souls forever entwined, immortal as the skies and stars above.   Farewell, dear ones!  Adieu. We will see you wherever Love abides in this world. 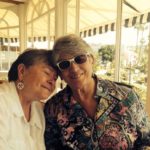 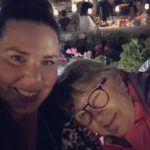 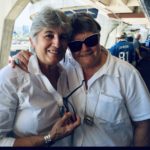 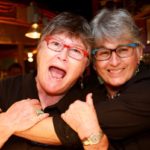