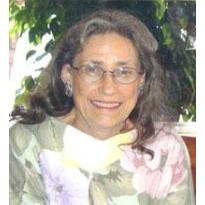 Marilyn Joan Thrasher was born in Madison, Wisconsin and spent her youth in Rochester, Minnesota. After graduating high school she moved to San Diego, California where she was employed by Thrifty Drug Stores.
She was married to Herb Abrams in 1958.  Herb’s job as an aerospace engineer took the family to Nashville, Tennessee; to Ft. Worth, Texas, where son Tom was born in 1964, to Seattle, Washington and back to San Diego.
For several years Marilyn owned and operated a children’s book store in La Jolla, California. She moved to Mission Viejo in 1971, where Herb was then employed. The family spent 18 months in France where Herb worked on the Concorde SST. Living in Paris was a dream come true for Marilyn. She and Tom enjoyed every minute of it. Upon returning to Mission Viejo Marilyn received an AA degree from Saddleback College.
She became interested in birding and flower arranging, and in 1986 rented a space in the Antique Plaza, where she sold antiques, collectibles and flower arrangements. She enjoyed decorating her space, talking to customers and other dealers. She made many good friends there.
Marilyn never forgot a friend. She kept in contact with friends from her school days, and fellow coworkers. In later years most of her time was spent tending her back yard garden. She had many cats and all were much loved. Marilyn was enthralled by nature, especially birds. She enjoyed collecting unusual items to decorate her patio, loved to laugh and play cards. She and Herb spent many hours playing Spite and Malice, a two handed card game.
Marilyn was a fighter. She had triple by-pass heart surgery in 1987. In 1997 she underwent an operation for colon cancer and had to give up her business. She was cancer free for 8 years and then, in August 2005, it appeared in her lung. Although treated with chemotherapy, she was  unable to recover. She is survived by her dedicated and devoted husband Herb; loving son Tom.  Her free spirit and warm heart will be deeply missed by all.
A Funeral Service will be held on Thursday, December 29, 2005 ~ 10:00 A.M. at O’Connor Laguna Hills Mortuary, Laguna Hills, California. An Interment will follow immediately at El Toro Memorial Park, Lake Forest, California.
Please join the family following the services at the Mission Viejo Swim and Racquet Club. Please Select ?Reception? for directions and maps.