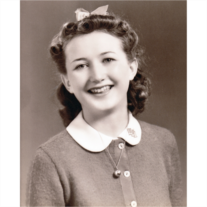 Marillyn Marie Myers was born to Sophie Hinz Hallman and Jack R. Hallman of Los Angeles, CA on May 27, 1923. She was welcomed home by her very excited big sister, Mavis.

As a child she enjoyed school, attending gymnasium twice a week, playing with her “kitties” at home, and going to Cambria every summer with her sister.

One of her best childhood memories revolved around summer vacations spent with her sister in Cambria at their maternal grandmother’s house. This is where they really became friends as well as being sisters. During these idyllic summers spent in the pines, some lifelong friendships were formed with some of the local families and their children.

Her childhood was also unique in that she met her husband, Cliff, in 4th grade. This special friendship culminated in marriage on July 21, 1944.

Some of her happiest moments were spent in the role of homemaker and mother of two children. Later that role included that of grandmother of two cherished granddaughters; she was now truly in her element.

Marillyn and Cliff enjoyed 73 years of wonderful times together. Some of their favorite pastimes involved baseball (participating, coaching, and watching THE DODGERS), Canasta parties, Chevron picnics, golfing, playing bridge, and just “hanging out” together.

Two of Marillyn’s favorite things to do were playing bridge and going to Olive Garden with friends. Sharing those memories were always guaranteed to produce a smile.

She will remain in the hearts of her husband, sister, step-brother, daughter, son, granddaughters, great-granddaughters and all those who loved her.