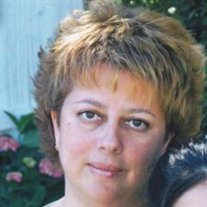 Dr. Marieanne Farha was born in Lebanon on August 16, 1959. Raised in Lebanon, she survived a very long and brutal civil war, which started when she was 12.
Marieanne would always say how her Catholic faith would get her through every struggle and tough time.
She met her soul mate Roland Farha at the age of 18 through one of her many favorite sports, tennis, and began her journey as a loving wife at the age of 27, on August 31, 1986. This coming August 31st, 2013, Roland and Marieanne would have celebrated 27 amazing years of marriage and 36 years of knowing one another.
Marieanne earned her PhD in Economics and was one of the most brilliant students ever encountered (according to her teachers and mentors).
She was recruited immediately after her graduation to be the CEO of what she caused to become one of the largest civil engineering/construction companies in Lebanon.
At the request of her only brother who resided in California, Marieanne dropped her life of fame and fortune in Lebanon and moved to the United States in 1987 to be near her brother. In 2014, she would have been in America for 27 years.
Marieanne was so loved by every person she came in contact with and by every place she worked at. She was so outgoing and sociable that she made friends everywhere she went. She would start at a new job and find herself eventually being the vice president of that same job.
She was the beloved Daughter of Asma Makhoul (age 84) and late Michel Makhoul. She was the younger sister of Dr. Elie Makhoul. She dedicated her life to caring for her parents who lived with her.
In 1995, Marieanne gave birth to Monique Farha. She initially struggled with finding a name for her baby girl, but as a poet herself, she loved Napoleon Bonaparte’s poetry, which romanticized about his mistress, Marieanne, and her daughter, Monique. So she would name her daughter Monique, and Monique would become Marieanne’s everything.
Marieanne was so proud of her daughter, and the two shared an indescribable intense love for each other, and a bond, which truly showed that they were more than a part of each other, Marieanne would become Monique’s best friend, and Monique, who is now 17 years old, would become Marieanne’s favorite subject.
In 2006, no sooner than Marieanne and Her husband Roland started a successful Subway franchise, in San Clemente, California the struggle began. Marieanne was diagnosed with a very rare and aggressive type of Lymphoma Cancer, which was apparent on her legs and had spread internally to some of her lymph nodes.
For the next year or so she fought back with strong chemotherapy and radiation followed by a very nasty bone marrow transplant giving the marrow back to herself. She was determined to conquer her cancer and so she was declared in full remission, only for the Lymphoma to come back with vengeance in 2010.
The Lymphoma came back and she had to go through another regimen of heavy-duty chemotherapy and another nasty transplant, except this time the bone marrow was donated to her by her brother, Elie Makhoul. Against all odds, they were a 100% match. Marieanne would always joke about the fact that she and Elie were clones; in the way they spoke, laughed, made jokes, and had the same bone marrow. She was finally truly cured of the Lymphoma. Elie and Marieanne were as close as brother and sister could get. His wife, Debbie Makhoul, and two daughters, Misha and Jennifer, were also very close to Marieanne. Jennifer and Misha would call her Aunty Anne because they could not say her full name as little kids.
Marieanne, counting her blessings, thanking God for her whole family, and excited for the new lease on life, bought new clothes, remodeled her Subway store, started planning for her daughter’s college and making plans for the long healthy future.
EXCEPT THAT GOD HAD A DIFFERENT PLAN FOR HER:
In June of 2013, she was diagnosed with a stage 4 incurable stomach cancer.
This was her third battle against cancer and her body was not as strong. After only one dose of chemotherapy she lost so much blood that she ended up in the emergency room, fighting for her life. On Saturday the 10th of August, Marieanne had a stroke paralyzing the left half of her body, and the cancer had aggressively spread throughout her whole body, leaving no room for improvement.
She passed away on her birthday, August 16, 2013 at the age of 54 in the arms of her brother, husband, and daughter, with her family around in a hospital room full of balloons and birthday presents.
This day will never be forgotten. The day that a Daughter, Sister, Wife, Aunt, and Mother, so amazingly beautiful, smart, and witty left this earth to sit at God’s right hand. We have strong belief that for now she is an angel watching from above, and that one day, we will see her again.

The funeral will be on her wedding anniversary the 31st of August, 2013. There will be an open casket viewing at 9 am, and a mass service at 10 am at St. Edward’s Catholic Church in Dana Point, followed by her burial around 12 noon in El Toro Memorial Park in Lake Forest.