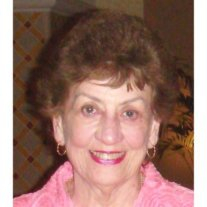 On Monday morning, July 1, 2013, Marian Norris passed away peacefully after a long period of declining health. She was quite a lady artistic, educated, kind, loving, and creative. Strong, independent, and gutsy, Marian also loved travel and adventure – truly a woman ahead of her time.

Marian was both an artist and a teacher. She taught elementary and junior high school students in Orange County (Florida) public schools for most of her career. An extraordinary teacher, she always championed the underdog and believed passionately in the importance of keeping the arts in public schools. Even after her retirement, she continued to teach art to students from venues as diverse as the county jail to various after school programs in California. She earned her Bachelor’s degree in art education from Miami University in Oxford, Ohio, and a Master’s degree in education from the University of Central Florida while still teaching full-time in public schools. Her entire life was devoted to educating young people, and even during her hospital stays, she offered to teach drawing and painting to her nurses.

Marian was also a prolific artist who explored almost every artistic medium imaginable during her lifetime. When she moved to southern California, she joined a plein air painting group, exhibited her work, and got involved in the local art community. Her home was filled with a collection of her work and many of her paintings adorn the walls of other people’s homes around the country. She also was proud to have two paintings selected to be part of the Art in Embassies program sponsored by the U.S. Department of State, and they hung in the official residence of the American ambassador to Oman during his tenure there.

But the role she enjoyed the most during her lifetime was that of mother and grandmother. Though her only daughter and grandchildren lived overseas for many years, Marian was unafraid to get on a plane to go and visit them no matter where they were, and they came to visit her as often as they could as well. When the grandchildren were younger, she was always giving them an impromptu art class or playing “tea party” or other games with them. Her own daughter, Rebecca (Becky), was inspired by her mother’s example and also went into the field of education. Her love of California also inspired two of her three grandchildren to move to the Golden State.

Marian will be sorely missed by her family, friends, and neighbors. She is survived by her daughter, Becky, son-in-law Gary, grandchildren Michelle, Alex, and Kristina, sister Shirley Smith, niece Monica Eaton, and nephew Brandon Smith. Her family welcomes her friends to come and celebrate her life with them on Saturday, July 20, at 10 am at St. Andrew’s By-the-Sea in San Clemente, California.

The National Art Education Foundation has been designated for those who would like to make a gift in her memory. www.arteducators.org/grants/national-art-education-foundation