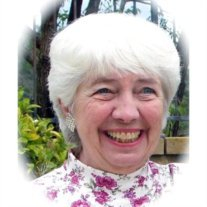 The last of four children born to Elizabeth and Frank Villeneuve, Margaret (Margot) S. Alberg passed away peacefully on November 15, 2013, fittingly surrounded by her children, grandchildren and great-grandchildren. Born on September 30, 1931, Margot was raised in a loving home in Syracuse, New York with her sisters Mary Junod, Sister Doris Villeneuve, and brother Alfred (Fritz) Villeneuve, who survive her. Margot graduated from the College of Saint Rose in Albany, New York in 1953. Shortly thereafter, she married William M. Burke, with whom she had seven children: Donald R. Burke (Jeannie), Karen F. Mandall (Mark), Michael J. Burke (Diane), Paul W. Burke (Jacqueline), David J. Burke (Raeni), Mary E. Kono (Kelly) and T. Kevin Burke (Alma). Her husband passed away unexpectedly leaving her to raise seven children on her own. This tragedy was followed shortly by a blaze in the family home, forcing Margot to move her family into temporary housing.

Throughout those trials and tribulations, Margot never lost her love of life, or focus upon that which was most important to her: her family. It was on a visit to family in California that Margot was introduced to John (“Jack”) F. Alberg, who himself had three children (Robert Alberg (Patricia), Carol A. Young (Ron) and Anthony J. Alberg (Laura)). After a cross-country courtship, Margot and Jack wed on November 22, 1973. Their love and devotion to each other merged two families into one.

Jack preceded Margot in death this past year after 38 years of marriage. She is survived by her 10 children, 22 grandchildren, and 9 great grandchildren. Margot’s faith, grace and love of life shined through her beautiful smile that drew people to her like a beacon.

Services for Margot will begin at 11:00 a.m. on November 27, 2013 at Santiago de Compostela, 21682 Lake Forest Drive, Lake Forest, California 92630. The family requests that donations be sent to the American Cancer Society in lieu of flowers.