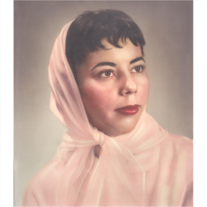 She is survived by her husband Gene, her son Robert and her three sisters; Gloria Marquez, Consuelo Cabanas, Eva O. Fillion, and her brother Horacio Olivares Lopez.

A vigil will be held for her at O’Connor Mortuary in Mission Viejo, California on Wednesday, January 13th from 7:00 pm to 9:00 pm. Her funeral will be held at St. Nicholas Church in Laguna Hills on January 14th, at 9:00 am with the gravesite ceremony immediately to follow at Ascension Cemetery in Lake Forrest.

About Margarita
Margarita was born in Sanderson, Texas, in 1933. Her mom died when she was very, very young. Her father worked hard for the railroads. He and their family raised four beautiful girls and a good man; Eva, Connie, Gloria, Margarita, and Acho. The young family move to San Antonio, Texas. Later, she worked as a beautician. Maggie was always giving and fun. She helped raise her young cousins and she loved to dance!

Dancing is how she met her husband. Gene who was in the army, was stationed in San Antonio. His friends dragged him to a USO dance. For him it was love at first site but Maggie played it cool. Gene kept pursuing, finally he got his dance and about 8 weeks later they were married! The year was 1960. Gene and Maggie would dance together for many years!

Maggie was a beautiful woman filled with love that flowed from her. She was always giving, and sacrificed a lot, having to be away from Gene who was on duty in Germany, while she worked in San Antonio. Then after the service, she joined him on his Fellowship to study. They had to move a lot. Along the way, God provided a son, Robbie.

She was a joy to be around. The best cook ever! Later in life, she was a childcare provider. First at home then for a local daycare. She didn’t drive and was happy to walk the 3 miles there and back just to be outside. People who knew her would stop and give her a ride because she was nice to everyone.

After her time in childcare, she went on to help raise her granddaughter, Emily. For 10 years, Lita (grandma) was the best and most cherished childcare and after-school program on earth.

She was wonderful and devoted mom, grandmother and wife, and a best friend to her husband.

Margarita was humble, gentle, but with a reserve of strength that belied her small stature. And in the last episode of her life, had the courage to smile and withstand all that happened to her. She was a major blessing to her husband, her son and entire whole family.