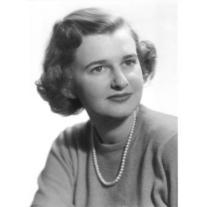 Margaret Jeffries Roberts died on January 3 after a lifetime of devotion to children those in her family and the hundreds she taught first as an elementary school teacher in her hometown of Bakersfield, Ca., then for the Department of Defense in post-war Germany, and for 20+ years as a special-education teacher in Dana Point. Her colleagues at R.H. Dana described her as a pioneer in the field.

Starting in the late 80s, Margaret embraced retirement much as she did teaching cheerfully and wholeheartedly. She traveled frequently with husband Doyle, staying at universities to learn about Native Americans, Shakespeare, and the Pacific Southwest. She volunteered at the Friends of the Library in Laguna Niguel, and was an avid reader, eager walker, and jolly drinker of California wine. She was proud to be a native Californian she read the LA Times every day Margaret was proud of her association with Pomona College where she earned her Bachelor’s Degree. Also, she was a Member of American Association of University Women, Gourmet Cooking Club and representative to the local teacher’s union.

Margaret was a resident of Laguna Niguel for more than 40 years, the last five spent in a valiant battle against the devastating impacts of a brain injury and dementia. She amazed doctors and delighted family members as she recovered beyond expectations time and again. Even when she compared her memory to the dense valley fog of her childhood, her kind, strong, opinionated character always shone through.

She is preceded in death by husband Doyle and son Kirk.