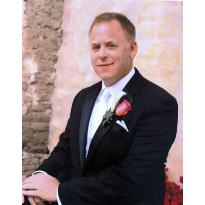 Marco T. Forster passed away on July 19, 2010 at his home in San Juan Capistrano, California. Marco was born December 3, 1969 to Thomas A. Forster and Mary Jane Forster Foley in South Laguna, California. He was a seventh-generation, San Juan Capistrano native. As a boy, he attended Old Mission School, where he was a star basketball player and served as President of the Student Body and King of Swallows Day festivities. He graduated from Capistrano Valley High School in 1988 and attended Saddleback Valley Community College, where he focused on the fine and technical arts. He was employed by Moulton Niguel Water District. On April 17, 2010, he married his long-term sweetheart, Sharon Lynn Forster nee Mageno.

Marco was a talented musician and artist, a surfer, a man of service, an incomparable storyteller. He will be remembered as a treasured friend, a beloved husband, and a cherished son and brother.

All services will be held at the San Juan Capistrano Mission Basilica: Rosary and Memorial Service on Thursday, July 22 at 7 p.m.; funeral on Friday, July 23 at 10 a.m.

The family requests that donations, in lieu of flowers, be sent in memory of Marco T. Forster to the Boys and Girls Club of Capistrano Valley, One Via Positiva, San Juan Capistrano, CA 92675. Secure online donations may be made at http://bgccapo.com/donate/select.htm.