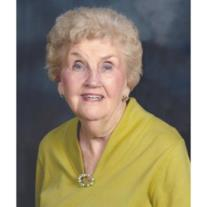 Marcella Elaine Heeney (nee Houske) died Wednesday, Nov. 19, 2015 at Mission Hospital in Mission Viejo, CA. Family members had been continuously at her side since she suffered a stroke the previous day. Born Oct 2, 1925, she was 90 years old.

She was the second of five children born to Roy and Eva Houske. The family’s early days were spent in the heartland of South Dakota in the small community of Ramona. Marcella grew up on a farm where she learned the meaning of integrity and hard work, qualities she carried with her throughout her lifetime. After graduating from Ramona High School in 1942, Marcella accompanied an aunt and uncle to Southern California. Eventually the entire family moved west and called the San Pedro-Torrance area home for many years.

She was working as a teller for Bank of America in 1952 when she met the love of her life, Joseph Heeney. They were married October 5th of that year. As Joe was a career Navy man and spent many months away at sea, Marcella had to assume a leadership role in the household, a responsibility she excelled at.

A devoted mother and excellent homemaker, Marcella dedicated her life to her family – both immediate and extended.

The couple had two children. Their son, Kevin, was born in 1956. Cheryl arrived in 1962. The family lived in Torrance, California although they accompanied Joe on two tours of duty, one to Bainbridge, Maryland where Cheryl was born, and the other to Kodiak, Alaska.

In 2007, Marcella and Joe headed south. They made numerous friends at The Covington, an assisted living facility in Aliso Viejo, California where they lived for eight years. They enjoyed spending time with family members as well as other residents and staff. Sadly in February of this year, Joe died. Marcella was heartbroken but did her best to continue on.

Also surviving Marcella are brothers Dr. Donald Houske and Jerome Houske of Torrance, and her sister Joanie Jones of Mission Viejo as well as numerous nieces and nephews in Southern California. Her oldest brother, Dr. Chelsey Houske and her parents, Roy and Eva Houske, preceded her in death.

A Memorial Service to celebrate Marcella’s life will be conducted at 1 p.m. Saturday, December 5th at O’Connor Mortuary, 25301 Alicia Pkwy., Laguna Hills, CA 92653. She will be buried with her husband at Riverside National Cemetery.