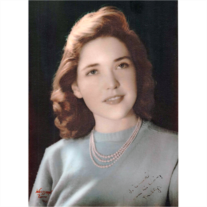 Vera Mallory Allen of San Juan Capistrano, CA and formerly of Andover, MA died at her home on September 27th with all three of her children present.

Mallory was born in Grand Coulee, Saskatchewan, Canada on May 21st 1918. Shortly thereafter her family moved to Proctor, MN where she would later meet her classmate and future husband Charles F. Allen. Chuck and Mallory married in the spring of 1943. Immediately after the wedding, the newlyweds moved to Southern California where they started their family.

In 1956, the Allen family moved to Andover, MA and found a home on the peaceful shore of Haggett’s Pond. Mallory was an avid reader and bridge player, a graceful swimmer and a huge fan of the Boston Red Sox. More than anything else, she loved music and singing and spent her last day on this Earth in song.

In 1982 she and Chuck moved back to Southern California, ultimately ending up in San Juan Capistrano. Chuck passed in 1988.

Funeral services will be held at O’Connor Mortuary on Tuesday October 4th at 10am.