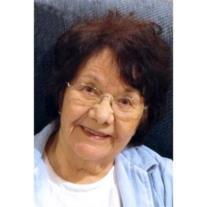 Magdalena Villasea’Or passed away peacefully at the age of 91 on Monday, December 15, 2014 with her family by her side at the home of her daughter where she lived for the past 2 years. She was born on January 17, 1923 in El Paso, Texas to Ysabel and Elizario Valles and was raised the third of seven children. She met her late husband of 52 years, Jesus VillaseÃ±or, in California where they raised their daughter, Isabelle. Magdalena had a successful career as an Executive Secretary and Bookkeeper where she delighted in balancing everything down to the penny. She was a devoted Catholic, an exceptional seamstress, loved the Dodgers, and treasured working in the garden. Her greatest love was her family. She never tired of being right in the middle of the action and her smile would light up the room. She is survived by her sister, Josephine Bohannan; daughter, Isabelle Villasea’Or; granddaughters Lisa De Bono (Paul), Jenny Briones (Speedy); five great-grandchildren, Anthony, Jake, Joshua, Michael, Sara and numerous nieces, nephews and friends. The family appreciates your prayers and support and is comforted in knowing that through God’s grace, she is now spreading joy throughout Heaven. She will forever be our Angel.