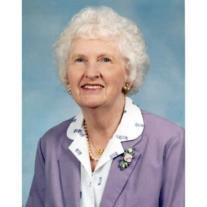 Mabel Alice Hadley Hicks went to be with the Lord on February 1, 2015.

She was born in Camden, New Jersey on December 25, 1918 and raised in Gibbsboro, N.J., the daughter of Mabel Martha Hammond and Azro Aaron Hadley.

Mabel completed High School and took college courses in Business. She received her Broker’s License in Real Estate after raising her family.

While growing up, Mabel was an active member of the Episcopal Church and enjoyed being a Sunday school teacher, member of the choir and the Altar Guild. When the children were young, she was active in the PTA, and the Pacific Palisades Women’s Club.

Mabel married Robert E. Hollinger in 1937 and was blessed by the arrival of Lucinda Gail, Spencer Robert and the twins, Richard Thomas and Ronald Allen. After Robert passed away, she met Forest Glenn Hicks and they were married in 1957. Forest adopted her children and they later welcomed the arrival of Gregory Bruce.

She lived for 15 years in Oxnard, CA after Forest retired. She was a member of the All Saints Episcopal Church and Guild. She also became active in the Ventura County Genealogy Society. With their help, she was able to trace her families back to the 12th and 13th centuries in England. She also enjoyed her participation in the DAR. She adored gardening – especially roses, bulbs and cymbidiums. For the past 15 years she has resided in Orange County, CA, and was active in the Mission Viejo Christian Church and several clubs in Casta Del Sol. In recent years she was lovingly cared for at Laguna Palms Board and Care in Laguna Niguel.

Her first love was for her Husband, Children and Grandchildren. Throughout her life she also loved her pets, especially cats and dogs.

Her ashes will be placed with those of Forest, her beloved husband, at El Toro Memorial Park.