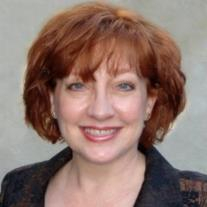 On October 5, 1953, in La Grande, Oregon, a baby girl was born, trailing clouds of glory from heaven as the poet Wordsworth would say. She was the second daughter, an alert blue-eyed beauty, for Richard Kenneth and Elaine Turner Baum. They named her Lynnette and everyone in their family rejoiced at her arrival. As time went on, Lynnette grew in stature and understanding. She had a bright, curious mind, an energetic body, and a kind heart. Lynnette’s whole face lit up when she smiled and she grew to love so many things: mountains and beaches, all kinds of people, horses-any animal, really-nature, music, books, and above all, her Heavenly Father. Once her testimony formed, Lynnette shared it often: telling anyone who would listen that she was a member of the Church of Jesus Christ of Latter-Day Saints, that the Savior lived and the restored gospel was true. She was faithful to her beliefs throughout her life and served in many positions within the church.

In the early eighties, Lynnette found her niche in radio, as a production manager at KFAM-Utah, writing and producing radio spots, and also doing voice-over work in advertising. She developed her craft and won many accolades during her career. To share just a few: The Golden Microphone Awards and The Silver Microphone Awards-multiple times each, The Benson Awards in 1985, The Odyssey House Excellence in Reporting Award. Her talents were many and covered a vast spectrum of interests. Lynnette was truly a Renaissance woman. She loved English Hunt/Jump horseback riding; loved to fish, write, paint, sing, and dance. Audiences enjoyed seeing her perform in Joseph and the Amazing Technicolor Dream Coat as the Narrator, in the chorus of I, Pagliacci with the Utah Opera Company, and college productions of Toyland, She Loves Me, and Hot Tix. Lynnette recorded LDS church manuals for the blind and was featured in several missionary training films.

With courage and determination she followed her dreams to California where she taught and perfume voice overs. She both wrote and voiced a children’s video entitled “Wild Babies of Yellowstone.” She also worked as marketing director for companies such as YOR Health and the Laguna Arts Festival. She was an artist and a performer. She shared her rich voice in many church productions expecially notable as the adult Mary in “Savior of the World.” Her greatest gift and love, however, was writing. She produced poems, music, screen plays and short stories. She was awarded two honorable mentions for her short stories in fantasy. As a freelance writer Lynnette also edited other’s works as well as ghost writing for them. She was Pres. Emeritus of the Southern California Writers Association where her goal was to “empower authors to discover their unique voice and honor their vision throughout the writing process.”

Lynnette was a devout daughter of God who lived her faith and touched the lives of all she met with her devotion to Jesus Christ and her friendship. She had great insights and understanding of gospel principles and was an inspired teacher. She was a hero to many for her ability to handle the challenges and vicissitudes that came her way with patient endurance and confidence in the plan the Lord has for all of his children. She has left us too young but with deep memories of love, laughter and joy.

Lynnette endured many months of pain and illness before passing away on September 9, 2015 in Santa Ana, California. Just sixty-two, she left behind her mother, Elaine Baum, her sisters LeRae Archibald, Karen Bateman, Roxy Haynie, and two brothers, Rick Baum and Steven Baum. In addition, there are many other broken hearts at this time, those friends who stuck with Lynnette through the years and served her so unselfishly at the end of her life. Thank you, Jeanette and Susan. You are both angels.

A memorial service will be held for Lynnette on Wednesday, September 16, 2015, at the Irvine Stake Center in Irvine, California. Her funeral will then follow on Friday, September 18, 2015 at the Loveland Funeral Chapel in La Grande, Oregon. Our beloved Nette will join her father, sister, grandparents, aunts and uncles, when she is buried at Hillcrest Cemetery later that afternoon.

Lynnette put her heart into everything she did and had a passion for making others happy. If success can be measured by charity, loyalty, and the desire to give and receive love, then this special lady succeeded beyond measure. Goodnight, beautiful, blue-eyed dreamer. God be with us all until we meet again.