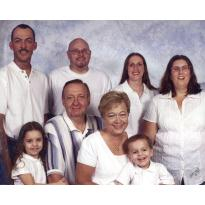 Lynn was always bothered by extensive obituaries for people who died. He said there was no point in talking about where a person lived and what he had accomplished. The only words he wanted written were: Lynn Sims, Child of God. That said it all for him.

But the rest of us selfishly need to know a bit more. So I hope Lynn will forgive us for adding a postscript to his personal statement, describing some details about the life God gave him.

Lynn Mike Sims was born in Maywood, California, to Clyde and Katherine Sims on June 25, 1948. His father was a man of few words who wasted nothing-including letters of the alphabet. Lynn’s middle name was Mike-not Michael-and the name was purposefully concise so it couldn’t be shortened to a nickname. He ingrained in his only son that same frugality and dislike of extra clutter.

Lynn had three sisters-Mary, Patricia, and Linda. He gladly assumed his role as the oldest and the only boy-providing his sisters with involuntary haircuts, an accomplice to mischief, and an example of what happens when you break the rules-sparing them the same fate. His boyhood adventures are legend-from being apprehended by the police at age two for turning on all the lawn sprinklers as he explored his neighborhood, to crawling around on the roof of his two-story house at age three, to his series of go-carts and odd jobs. He mowed lawns, delivered papers, and peddled avocados from his neighbor’s tree with permission. He wired his sisters’ playhouse with electricity and built his own model railroad layout with scraps of wood. Lynn said his father’s greatest gift to him was never telling him something was too hard for him to do. He learned to figure things out and accomplish them.

But the best thing that happened to Lynn occurred when he was about nine and was invited to attend Vacation Bible School at Zion Lutheran Church, a few blocks from his house. His family became involved in worshipping there, and the children enrolled in Zion Lutheran School. There they were taught by Christian pastors, teachers, and friends to love the Lord, follow His ways, and serve others. Lynn was baptized and confirmed into this faith. He later belonged to Good Shepherd Lutheran Church in Downey, where he was a youth counselor, and came to Abiding Savior in 1973, where he was involved in starting the school and building the facilities.

Lynn attended Bell High School and Cal State Los Angeles, and earned his Master’s Degree from Pepperdine University. In 1968, he married Carolyn Stroebel, a first year teacher at Zion Lutheran School. She first set eyes on him the first day she visited the campus during the summer before school started and can tell you exactly what they both were wearing when she saw him pouring punch during Vacation Bible School. He won her hand and her heart by persistence, charm, and deceit. ‘Of course I love to dance!’ They were married in 1968 and were blessed with 40 years of matrimonial adventure. They were each other’s best friend. God brought Michael and Kathy to them through adoption, and Lynn was a responsible, wise, and loving father. He was so thankful for and proud of Michael, who serves as a Staff Sergeant in the U.S. Army, and he was devoted to Kathy, an early childhood educator, who won his heart when she smiled and batted her eyelashes at him the first time he saw her when she was ten weeks old. His love and joy expanded to include their spouses, Amanda and Daniel. And he adored his grandchildren, Michaela and Lane. He experienced the fulfillment of the joy that comes when ones children walk in the ways of the Lord.

Lynn taught high school for seven years in Bell, Mission Viejo, and El Toro. He was the first woodshop teacher at El Toro High School, where he also taught behind the wheel driver’s training. His philosophy was to always treat your students with respect because they may grow up and move in next door to you. That philosophy came true as he regularly saw his former students professionally and even here as members of Abiding Savior. He left teaching ‘temporarily’ 35 years ago to pursue a career in construction-self employed for many years as Sims Construction Company, a forensic consultant for construction defect cases, and most recently a project engineer for Slater Builders in Costa Mesa.

Lynn loved his Lord, his family, his friends, and his church. He loved using his gifts to build and fix and offer support. How we will miss his ‘out of the box’ comments and ‘Lynnisms!’ He was wise and funny, strong and gentle. He was a child of God, secure in His grace.

We might think God’s watch was running fast last Sunday morning when He called Lynn home. It was far too early for him to leave. But Lynn would say, ‘Don’t panic. I love you. I’ll see you later.’ And he will.