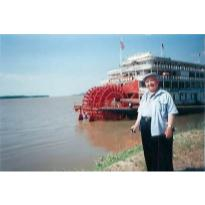 My father, Luther O. Self, Sr., passed away this morning, October 29, 2010. Luther was a very big man at 5’5′. He was born in Birmingham, Alabama on February 9, 1920. Luther started working professionally at age 12, singing for wedding and funerals. Luther was born with a god-given tenor voice that had great range and timber and he became probably the greatest Church song leader in the 20th Century according to other song leaders. Luther never lacked in his own confidence and many might have said that he was a cocky ‘peckerwood.’ That in fact was one of his school nicknames. It is still unclear to me what ‘peckerwood’ means.

Luther was born in the roaring 20s, lived through the depressing 30s on his grandfather farm in rural Tennessee, without a father, milking cows by hand, and went to school without shoes; really. Luther started college at David Lipscomb College in Nashville, Tennessee, in the late 30’s, where he supported himself and financially helped his sister too, with his singing and any other job he could find. Luther was a good basketball player with his two hand set shot and played for Lipscomb and later Pepperdine College, in the mid- 40s, where he attended in Los Angeles, California, on a basketball and tennis scholarship. Luther and my mom, Kathleen, also managed and operated the original Oasis Grill, the first food establishment at Pepperdine University, which still is in operation today at Pepperdine University in Malibu, California. During his time at Pepperdine, Luther also sang in a barbershop quartet which appeared at the ‘Drunkard’, a Hollywood vaudeville theater, for many years.

During the Pepperdine school years, I was born as well as my brother Steve, who joined my older brother Denny, who was born in Michigan. Luther graduated from Pepperdine with a combined degree in music, Greek, religion, and a new field, audio-visual education. Luther later attended Wayne University, where he did graduate work in audio-visual education. There were only a few people in the field at the time. We moved back to Nashville, Tennessee, where many of Luther’s side of the family lived, and my sister, Melinda, was born. Luther started his own business in Nashville in audio-visual education and became the State representative for Bell and Howell, the movie projector and other, then, high tech machines of the time. Yes, this business was the precursor of the computer age. Luther also continued to lead singing at church and had a Nashville radio program on Sunday morning where he sang Christian songs with musical accompaniment under the name of David Dryden, his mother’s maiden name. Luther used the name David Dryden because the Church of Christ, where we attended, and where Luther was the song leader, did not allow musical accompaniment. Luther would always tell the story of the woman who came up to him after church and told him how much she appreciated his singing and complimented him on how much he sounded like the radio singer, David Dryden. Luther just smiled and said, thank you, Mam. During our time in Nashville it was the start of television and the original heyday of country music, with the show Grand Ole Opry starting. Luther, of course, knew a lot of the singers and songwriters in Nashville. Although Luther’s business in Nashville was quite successful, he and my mom yearned to return to the Golden State of California, with its promise, opportunity, and fresh challenges. California at the time of the early 50’s offered everyone the chance to be and make whatever your imagination would allow. California had a thousand miles of relatively undeveloped coastline, a still emerging and growing entertainment industry, a State-wide, world class educational public school system, and a chance for everyone to be whoever they wanted to be. No wonder Luther and Kathleen wanted to return to California, it was perfect for them, just like it was for millions of others who sought freedom from convention and equal opportunity. It was the land of dreams, and Luther was a dreamer.

Luther started a new business in Los Angeles called Self Teaching Aids. The business lasted around five years and then collapsed into bankruptcy when investors pulled the financial rug out from under him. We lost the big house, fancy cars, and capital, but remember Luther was a dreamer and an entertainer. A talent agent had met Luther and knew of his work with children in vacation bible school and his talent as an entertainer. The agent, with the name of Scrappy, arranged to have Luther make a pilot film for a new national children’s television show for NBC. This was in 1958, when T.V. shows were live. You know, where you make a mistake on the air, and it stayed on the air. Luther used to tell the story of another children’s TV personality that forgot he was still on the air when he said God Bless you,….you little bastards. You know what happened to him. NBC decided not to pick up the show, but Paramount Studios in Hollywood, through channel KTLA, picked up the Uncle Luther show for the L.A. greater area. It was a big hit. It was the highest rated children’s show in L.A during that period of time. We first lived in Hollywood during the start of the Luther’s T.V. period, and then later moved to Claremont where all of the colleges are. The T.V. entertainment years from around 1958 to 1962, were, I think, the happiest days of his life. Luther was an entertainer and just loved it. The theme song, which he wrote, for his Uncle Luther show, says more about Luther, than you’ll get from what he did. It was entitled ‘Be Happy and Gay.’ This was a song he sang to the kids on the show and the audience every day. The lyrics were: ‘Be happy and gay, never be sad, be kind and good, mind Mother and Dad, Play fair with your playmates and have lots of fun. Let your light shine before everyone.’ During the Claremont years, brothers Scott and David were born, bringing the grand total to six children, which were spread over two generations. Luther always wanted to get back on TV, or entertain, and tried most of his life. Other than weddings and funerals and church he never got another chance to return to his TV days, but he never gave up trying.

Luther was the type of person who was just never embarrassed about what he did. I think it was because he was always trying to do the right thing. He felt a great responsibility to support his family in any way possible. During the years, Luther sold books door to door and sold pre-need grave sites. In each job he was always the best at what he did. He set records for sales in both of the jobs of books and graves. About 1974, Luther and the younger family moved down to Orange County where he started working in real estate. It is true that Luther could sell ice to an Eskimo. Luther and Kathleen started Laguna Hills Properties, specializing in Leisure World property. Of course he was very successful. Luther could sell and he could work with people. Luther loved people, all people, and people loved Luther.

The most inspirational attributes that I saw in my father was his ability never to try to cheat anyone. Luther would never hold grudges no matter the wrong caused him or the disappointment. When other people, like his family and friends would disappoint him, he never said that’s it with you. We all know how many disappointments six kids can cause. Luther always stayed positive, and I mean always. Luther would always talk to anyone and sing with anyone. After our mom died, Luther re-married, Joelda, a woman who loved music as much as himself. Luther and Joelda became the wedding and funeral duet. Unfortunately Luther out-lived Joelda too.

In the last few years, Luther sang at his last wedding. It was for Christine and Cheech, my brother’s daughter and son-in-law. The wedding took place at San Dustin, Florida over about a week. It was a beautiful week of celebration, and Luther was at his best. Cheech’s family is Cuban. His dad and uncles are all doctors. It was a large wedding and all of Cheech’s greater family was there. Luther sang at the wedding and when the time came for the wedding prayer at dinner time, Luther was asked to say the prayer. Instead of saying a prayer, Luther sang, ‘Bless Our House’. There wasn’t a dry eye in the room, and the entire audience was knocked to the floor. It was a great performance, and Cuban cigars for everyone. If the United States had sent Luther to Cuba, it would have been opened to the United States a long time ago.

In the last few years of his life Luther would visit Jannie and me, and Alex and Bonnie, in Hawaii. He loved every place he ever visited and always thought it was the nicest and best place on earth. Luther used to always say, ‘You can run but you can’t hide.’ When he first came to Wood Valley in Ka’u, Luther said, ‘You can hide up here.’ Luther loved the people of Hawaii and they loved him. Luther would go down to Punalu’u Black Sands Beach in Ka’u with me and loved to sing and be with the people. Luther was a natural In Hawaii, just like he was any where he went. Luther walked with the rich and famous throughout his life, but he never thought of himself as better than anyone else. Luther lived and died with love in his heart and was a great-great-grandfather. He is survived by many, many grandchildren. There are two grandchildren, David Luther Self and Scott Luther Self, who are named after him.

20 responses to Luther Oden Self