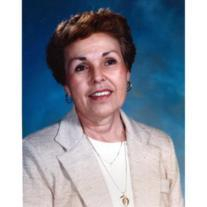 Lupe Pobjoy died peacefully on Friday December 28, 2012 at the age of 86 in San Clemente, California. Lupe was born Lupe Mary Luna, in Santa Monica, California on August 29, 1926.
She graduated from Riverside High School and attended Chaffey College. On February 8, 1948, she married Charles Pobjoy, They lived in San Bernardino, then Colton. Eventually they moved to Rancho Cucamonga where they raised their three daughters and were active in St Joseph’s parish for over 40 years. In 2003, they moved to Dana Point.

Lupe is remembered for her passion for life, unconditional love for family and friends, her dedication to God and serving others in her community. Her willingness to help others caused her to be involved in numerous service organizations. Her Catholic faith was a vital part of her life. She partnered with her husband, Charlie, attending the San Bernardino Diocese’s Deaconate Formation in 1984. She served as a Eucharistic minister for most of the last 20 years of her life.

Her humor and love of song sustained her. She is remembered as an ardent traveler, a proficient golfer and enjoying an new adventure. With an optimistic perspective she was always ready to support someone in need.

Memorial Mass and services will be held on Saturday, January 5, 2013 at 11 AM, St. Edward the Confessor Catholic Church, 33926 Calle La Primavera, Dana Point, CA. Friends and Relatives are welcome.