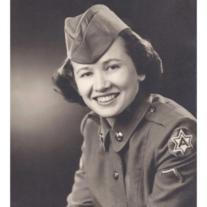 She was born July 4, 1930, in Beeville, Texas, to John Wesley Carr and Jeanetta Harrison Weaver Carr. She is a graduate of McFarland High School in McFarland, California.

A veteran of the Women’s Army Corps of the U.S. Army, she was a resident of California for 60 years, and was employed at several Aerospace companies including Lockheed Aerospace, Litton Industries, Martin Marietta, and Ford Aeronutronic as a Purchasing Agent.

Lucille is survived by her daughter, Susan Shepard-Howell and her husband, Jon Howell, Laguna Niguel, CA, her son, Stephen Shepard and his wife, Bari Buccola Shepard, Huntington Beach, CA, and two granddaughters, Katherine Chesnut, Seal Beach, CA, and her husband, Daniel Chestnut, Seal Beach, CA, and Margaret Shepard, Huntington Beach, CA and a great-grandson, Brooklyn Lee Chesnut, Seal Beach, CA; and two sisters, Pauline Brown of Hackett, Arkansas, and Elizabeth Fuller of Lufkin, Texas, and a brother Andrew Carr of Levelland, Texas. She is also survived by nieces, nephews, other relatives, as well as many friends. In addition to her parents, Lucille was preceded in death her husband, Joseph P. Shepard, and ten of her brothers and sisters.

Inurnment will be at the El Toro Memorial Park, Lake Forest, California. No immediate services are planned. Memorial contributions in Lucille Shepard’s honor may be made to an animal protection charity of your choice.