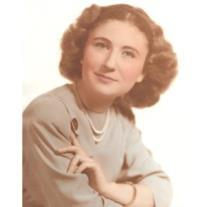 Louise Patriarca Jankowski passed peacefully on August 14, 2015 at the age of 93 in her beloved home of Laguna Niguel, California. She is preceded in death by her cherished husband of 60 years, Stanley; son John; her parents, Michele Patriarca and Angela Stefanelli Patriarca; and two sisters, Martha Patriarca and Philomena Sestili. She is survived by three children, Stanley Jr., Robert and Linda; two grandchildren, Matthew and Sarah Jankowski; and brother, Mario Patriarca.

Born in Isernia, Italy, Louise immigrated with her family to the United States during the political instability in Europe in the early 20th century, settling in Pittsburgh, Pennsylvania. There she attended Shenley High School and worked in the Chemistry Department of the University of Pittsburgh, where she met her late husband.

They resided in Pittsburgh, later moving to Maplewood, New Jersey; Berkley Heights, New Jersey; Wilmington, Delaware; and southern California. Louise was a dedicated homemaker, and she was noted for her spectacular cooking and baking skills, yet she remained humble about her magnificent gifts. She enjoyed the outdoors, her favorite spot being the Shenandoah National Park in Virginia.

Services will be private.