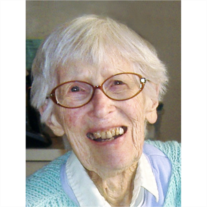 She was born in Boston, Massachusetts to Fred and Bertha Hunt and lived in Walpole, Massachusetts. She was employed as a clerk with an insurance agency in Boston. She came to California with her mom in 1948 following the death of her father.

Through mutual family friends, she met and married Loring Bigelow in 1949 and together they raised three children in Torrance, California.

She was a homemaker, active as a PTA president at her children’s school and leader of a Camp Fire Girls group. She enjoy doing needlepoint, knitting and making mosaics.

The family moved from Torrance to Laguna Hills in 1965 and have remained in the area since. In retirement years she and Loring enjoyed traveling around the country in their motorhome. They were proud to be part of the UCI 90+ Study for nine years and were featured on the CBS 60 Minutes special on the study.

She is survived by her children Emmie Miller (Doug), Norman Bigelow, grandchildren Erin and Colin Miller and her cousin Vincent Evans (Joan) in England. She is predeceased by her daughter Marcia Grundy and husband Loring Bigelow, to whom she was married for 64 years.