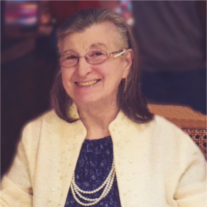 Join us as we celebrate her life on Friday, April 28 for the Vigil and Rosary at O’Connor Mortuary, 25301 Alicia Parkway, Laguna Hills, CA and at the funeral mass on Saturday, April 29 at 10AM at San Francisco Solano Catholic Church, 22082 Antonio Parkway, Rancho Santa Margarita, CA.

In 1988, at the age of 57, she received her Bachelors of Science degree from the University of San Francisco. She was an avid reader, loved Music and the Arts and spending time with her family. Her Catholic faith and beliefs were central to how she lived her life.

Remembrances may be made in the form desired by friends.