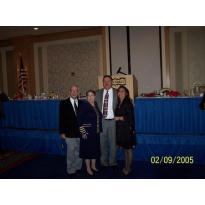 On June 15, 2008 Louis Anthony Radicia was called to take his place at the Lord’s table. No better place could be set for him than that which was next to his bride of 54 years, Marianne, who was called on April 16th of this same year.

The youngest of five children, my father was blessed with not one, but five mothers. Each of his four sisters, Lucy, Lilia, Virginia, and Rose blessed him with attributes each of them possessed, making my father the well rounded man and father he was. But, it was his mother who gave him a sense of quiet control over almost any situation.

To my mother, Louis was more than just a husband; he was her hero. Louis was strong, proud and full of integrity. Louis never took anything for granted, always seeing well in advance the potential follies or successes of every decision. Many may mark success by the fortunes they reap or the people they awe. My father’s mark for success was carved by the relationship of all he touched in person and profession. You always knew when and where the tide ebbed and flowed.

My father taught me not only to be an athlete, but also to be an ambassador of the game. He taught me to be gracious not only in victory but in defeat. Both, on and off the field, in and out of the public eye, he taught me the importance of doing what is right and standing up for what you believe in.

On June 15, 2008, Father’s Day, the Lord called my father to his side. After many weeks pain and yearning to be with his bride. As he lay there in his passing, I saw him without pain or suffering. A man, lost without his wife, a body crippled with cancer. No longer were these things present in the shell of the man who lay before me. My father’s spirit had finally arrived where the man had so often asked the Lord to take him.