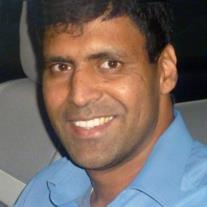 After fighting the good fight against cancer, Loris Desa peacefully passed away on July 2nd, 2015, two weeks shy of his 42nd birthday. He was surrounded by his loving wife and soulmate Roopa, daughter Kaitlyn, and son Kevin. Loris was a devoted father, son, godfather and husband. He was loved and respected by all those who knew him. Loris was notorious for his quick wit and quirky sense of humor as evidenced in his love for Seinfeld. He never shied away from a great food experience and would drive any distance to find a great restaurant.

As he bravely battled cancer armed with the knowledge of his disease that even surprised his doctors, Loris’ resolve, positive attitude and selfless virtue inspired all those around him. His childlike spirit and magical persona was reflected in the way he loved his Kaitlyn and Kevin. In addition to his joie de vivre he was a logical and progressive thinker, but most of all he was a man with a deep-rooted faith in God and his church. Loris will be missed, but never forgotten, by all those whose lives he touched.

The family requests that Loris’ fight against cancer be continued by donations made to the City of Hope, in lieu of flowers.