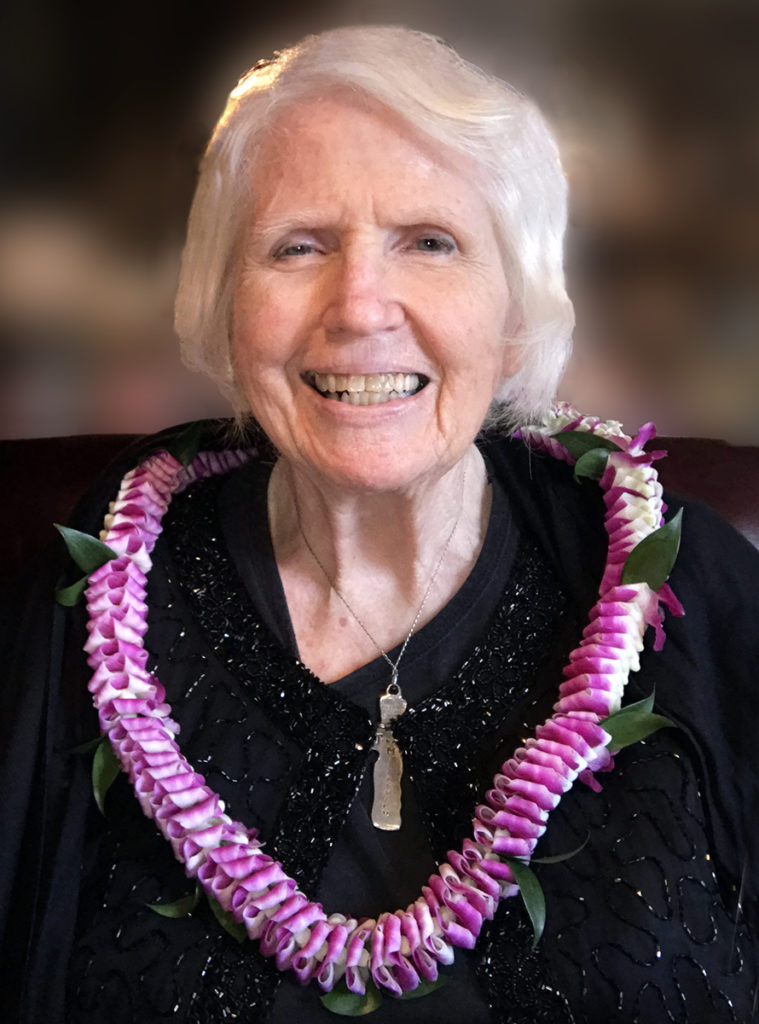 Born (March 26, 1936) and raised in Leonia and Englewood NJ, Loretta Margaret Theresa Peck Freeman (“Lorrie” or “Ray”) went to be with her Lord and Savior on September 6, 2018 in Newport Beach CA after a short battle with dementia.

Known as “The Mother of Guadalupe Gardens,” Loretta was the proud driving force behind, organizer of, volunteer coordinator and leader at and personal collector for San Jose’s Heritage Rose Garden, a five-acre rose garden in San Jose’s Guadalupe Gardens.  The Heritage Rose Garden contains over 4,000 plants, many seen there for the first time outside of Europe, was named “America’s Best Rose Garden,” and was the first garden entered into the Rose Garden Hall of Fame.  Loretta was the President of the Santa Clara County Rose Society (1991 & 1992) and the Clara B. Rees Iris Society.  She was a UC Master Gardener and a Consulting Rosarian of the American Rose Society, as well as an avid volunteer in the Garden Section of the Santa Clara County Fair, Noble Elementary School, and countless other family-, garden- and faith-based organizations.  Loretta was a dedicated member of the Lay Carmelite Order of the Blessed Virgin Mary.   She served as the proud inspiration for famed hybridizer Ralph Moore’s “Lovely Lorrie” miniature rose.

Loretta was preceded in death by her husband James L. Freeman, Jr, to whom she was a devoted spouse for 50 years, and by her brothers John and Thomas.  Loretta was an inspiration to and is survived by her daughters Laura Freeman, Mary Ericson, Kathie Freeman, Tricia Todd, and Dr. Anne Marie McNeill, as well as her son, James Freeman III.   She was an enthusiastic and proud grandmother to Alex Ericson and Gordon, Gabriel, Grace, Gavin and Mallory McNeill.  Loretta is also survived by her sisters Regina Mills of Salem, OR, and Bernadettte Peck of Walden, NY.  Loretta was a proud graduate of The Katharine Gibbs School and of Ohlone College’s Landscape Design program.  Loretta was an enthusiastic and dedicated member of Our Lady Queen of Angels Catholic Church in Newport Beach and Saint Victor’s Catholic Church in San Jose.