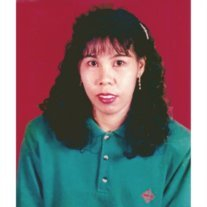 Our dearly beloved sister, aunt and friend Anacorita whom we fondly called Loretta, sometimes Ita, 47 years old has left and gone to heaven on April 9, 2013. Loretta has fought a very strong and courageous battle with liver cancer.

Loretta was born on August 28, 1965 in Agoncillo, Batangas, Philippines. She was the ninth of ten children of Benito and Maria Enriquez.

She graduated from Holy Family Clinic and Hospital with an Associate Degree of Radiology Technology. She worked at the Victoria Memorial Hospital in Marikina as Head X-Ray Technician for a lot of years until she migrated in the United States. She was the artist in the family. She also has a certificate in Architectural drafting from a Polytechnic University in Quezon City.

Loretta enjoyed hanging out with family and friends, watching movies and traveling. She collected refrigerator magnets from all the places she visited. She also has a good number of American Doll collections.

Here in the US, she worked in the family business as Administrative Assistant and all around. When the business slowed down she went and worked as a cashier at AM PM store. She enjoyed interacting with different types of people and customers. She made a lot of friends from doing so.

At home, she enjoyed cooking, baking and making desserts. She makes the best brownies, young coconut salad and so many traditional Filipino delicacies.

Loretta is a very nurturing, caring and loving person. She virtually raised our nephews and nieces orphaned early by our siblings. She always put other people ahead of herself. When she sees things family members would like, she bought them and would give them for their special occasions. She always has some stuff for the box to be sent home in the Philippines.

Loretta is survived by her sisters Sally, Celia and Marie, brothers-in-law, Gary, Jeff and Robert, a number of nephews and nieces here in the USA, Philippines, Dubai and Qatar.

May you rest in peace and you’re surely be missed. We love you forever. You just got your wings and you’ll be our angel.