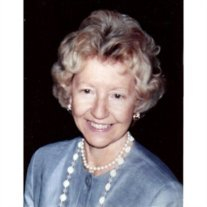 In the early morning of Friday, August 23, 2013, Lois Marie Martin, better known as “Scotty,” passed away at Mission Hospital in Mission Viejo, California, surrounded by the comfort and love of her family. She was 88 years old and is survived by her husband of 61 years, Wesley G. Martin.

Scotty was born Lois Marie Harrington on May 5, 1925 and raised in Manitowoc, Wisconsin, a town that hugs the shore of Lake Michigan. She attended Holy Innocents Catholic Grade School, Wilson Junior High School and Lincoln High School. After graduation, she was employed at St. Louis University for several years and later returned to Wisconsin in the city of Milwaukee where she worked for Northwestern Mutual Insurance Co.

On December 27, 1952, Scotty married Manitowoc native and schoolmate, Wesley Martin at Holy Innocents Catholic Church in Manitowoc. Together they raised four children in their hometown and enjoyed sailing on the lake, camping in nearby Door County and entertaining friends and family. As the children grew older, Scotty returned to work at various venues in town and was a long-time member of the Service League of Manitowoc County, Manitowoc Maritime Museum and volunteer for Holy Family Memorial Center.

After several years of visiting family in California and wintering in Arizona, Scotty and Wes made the difficult decision to leave their childhood home of Manitowoc and start a new life journey-moving out west. There, they found a home in Ladera Ranch, close to their sons, Michael and Scot, and just a few hours from Palm Desert where Wes’ older brother, John and his wife Donna reside.

Over the years, Scotty enjoyed many family barbecues, brunches by the water and memorable occasions that included her grandson’s first Communion in the Catholic Church and granddaughter’s talent show performances.

Immediate family survivors include her three sons and one daughter: Christopher C. Martin of Chandler, Arizona; Michael J. Martin and his wife Nina and daughter, McKenna of Laguna Niguel, California; Scot T. Martin and his wife Julie and son, Jack of Newport Beach, California; and Lisbeth Lee and her husband Gerald Lee Clark of Milford, Indiana. Scotty is also survived by her brother-in-law, Robert Conklin of Madison, Wisconsin and sister-in-law, Nita Anderson of Ocala, Florida. She was preceded in death by her brother Robert of Ocala, Florida and her sister Marjorie Conklin of Madison, Wisconsin.

A memorial service will be held in honor of Scotty on Wednesday, August 28, 2013 at 10:00 A.M. at St. Catherine of Siena Parish in Laguna Beach, California. Father Ken Schmit will officiate. The O’Connor Mortuary of Laguna Hills, California assisted with the funeral arrangements. In lieu of flowers, memorials may be made in Scotty’s name to: Guide Dogs for The Blind at www.guidedogs.com or your preferred charity.