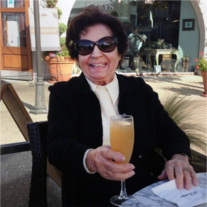 She is predeceased by her parents, her loving husband Major Warren H. Allen (USMC Retired), her siblings Nick Habre and Violet Hajaar and her beloved granddaughter Melanie Holden. She is survived by her children Warren Allen, Jr., Diane Kelly, Rosanne Froeberg and son in law William Froeberg, grandchildren Elizabeth Froeberg, Darren Slaughter (Sandra), Shawn Slaughter, Eric Froeberg (Meghan) and Mike Froeberg (Taryn). She is also survived by her great grandchildren, Travis Holden, Josh Slaughter (Hollen), Caroline Slaughter, Madison and Charlotte Froeberg and her great great grandson Ezra Slaughter born a month prior to her passing, as well as many nieces and nephews.

Having lived through the depression, WW II and the Korean War she experienced life as a member of “The Greatest Generation”. She talked about working in NYC on Madison Avenue and 34th Street, commuting from Brooklyn on the subways each day. She met our Dad at a military event at the St. George Hotel in Brooklyn in 1941. They were married a few months later and were together until he passed away in 1969. She never remarried, explaining she had already met the love of her life. She will be buried with him in Arlington National Cemetery-reunited after 48 years.

As a military wife she supported our Dad in his career, and she made our numerous transfers across country an adventure. She was an excellent baker and was known for her blueberry pies and rum cake. She was also a talented seamstress and even made formal gowns. She loved time in her garden and raised beautiful roses. She was a big fan of Frank Sinatra and told the story of standing in line in the rain to see him at the Paramount Theater on Broadway. She also played Master’s Bridge, was an avid reader and and kept up on current events, watching the news religiously each day.

She lived in Oceanside for 50 years and worked as an ESL Instructor at Mira Costa College. She was a member of the San Luis Rey Mission congregation.

At the age of 93 she moved to Aegis of Laguna Niguel. There she made many friends amongst residents, their families and the dedicated and compassionate staff. She resisted losing her independence but eventually accepted it with grace. She enjoyed the many activities, scenic drives and lunch outings. She made sure her hair and nails were always done. She insisted on wearing heels and nylons (even when in a wheelchair), skirts and matching sweater sets. She never owned a pair of pants. She was a true lady from a gentler and more simple generation who taught us all how to face life’s many challenges with strength.

We will forever miss her mighty presence in our lives, her ecstatic greetings whenever she saw family, her fierce loyalty to us all, her sharp wit and intellect and marvelous sense of humor. Standing at only 4’8″ she was a mighty force and influence in our lives. Even as she saw her health declining, she remained kind, sweet, proud and sociable. Her favorite past time continued to be spending time with family. She left us with wonderful memories which we will cherish until we are united with her in the future. We miss her presence in our lives but look back on a life well lived. She is forever in our hearts.