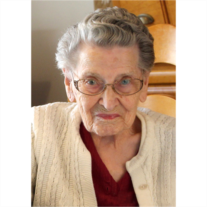 Lillian Margaret Meyer, 97, of Lake Forest, California, passed away of natural causes in her home on February 14, 2017. She was a beloved mother, grandmother, great and great-great grandmother, as well as a sister, cousin, and friend.

Lillian was born on November 23, 1919 on a farm in Shelby Township, Bureau County, Illinois. She was born to Valentine and Margaret Rauh and was the youngest of four children, half siblings Winnie and Bud, and sister, Marian. Marian still resides in Illinois and is healthy and sharp at age 98.

Through high school Lillian dated the love of her life. He proposed to her and she married William Meyer on October 19, 1940, just shy of her 21st birthday. Bill and Lil lived in Illinois for the first years of their marriage and eventually moved to southern Wisconsin. They were blessed with four children, Barbara Ann (1941), Lillian Rose (1943), William Valentine (1947), and Valerie Catherine (1957).

In 1963, Bill’s career brought the family to Southern California. Their daughters, Barbara and Lillian, were married by then and remained in Wisconsin. Eventually, they both relocated their families to California to be with their parents and siblings.

Lillian loved to be with family more than anything. Her love for each of us was unconditional, although, she did not hesitate to hold back if she felt you needed to straighten up and change direction in life. Her advice was always appreciated because of our love and respect for her.

She was an avid reader and read her Bible daily before moving onto the newspaper or a novel. Word searches were also a daily ritual as Lil felt that they helped to keep her mind sharp. She loved to play Yahtzee and Tile Rummy with her kids and grandkids whenever she could gather us for a game or two.

Lillian listened to music most every day. Her passion for music led her to build quite a collection of CDs in many genres. Some of her favorites were country, country gospel, and Christian hymns. She also enjoyed the music of Dean Martin, Frank Sinatra, and others of that era.

Lil worked as a secretary after graduation. After her first child was born, she was blessed to be able to stay home to be a mother and homemaker. Bill and Lillian were married forty-two years until Bill’s death in 1982. She then moved in with her daughter, Lillian, and then later with her daughter, Barbara. In 1993 she moved to be with Valerie, Glenn and their family where she lived happily for the rest of her years.

In September of 2014 Lillian suffered a severe stroke. After a difficult recovery, Valerie and Glenn were able to bring her home to care for her. She was a very strong, resilient woman and she was happy being home with family once again. The stroke, unfortunately, left her with several disabilities which stayed with her until her last days.

Lillian’s love, humor, knowledge, and playfulness brought such joy to all who had the privilege to know her. Her strong faith in God and Savior Jesus Christ was comforting and encouraged her family and others to grow in Christian faith. She will truly be missed!

Sadly, Lil was pre-deceased not only by her husband, but also by her two older daughters. Barbara passed away in 2005 and Lillian in 2016.

Lillian will be forever in our hearts until the day we join her in our eternal home with Christ.

In lieu of flowers, donations may be made to Rock Ministry at Mount of Olives Church in Mission Viejo. This is the church’s youth program and Lil loved it.