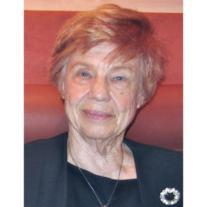 Lila Lee Cosby passed away peacefully at age 88 on October 19, 2012 at home in Laguna Hills, CA after a year-long battle with cancer. She was born in Richmond, VA on April 2, 1924 to Mittie Jaye and Philip Sanford Martin. At age 14 Lila sang on the radio and at 15 met the love of her life, James Franklin Cosby, at a church youth group. They were married while Jim was a WWII Army Photographer on February 26, 1945. While Jim studied aeronautics at Virginia Polytechnic Institute, Lila took classes in Psychology and conducted career testing for returning veterans. Jim had a long aerospace career with the Glenn L. Martin Co. (later Martin Marietta and Martin Lockheed), that took them to Baltimore (1951) and Lutherville, MD and to Lakewood, CO (1967). Both Jim and Lila zealously followed the space program, especially the Atlas Rocket, space shuttle, Mars Viking Lander and Lunar Rover. She and Jim even volunteered to be some of the first moon residents! A proud homemaker who lovingly raised two daughters, Lila was always active in her church leading numerous women’s workshops at University Baptist in Baltimore, MD; First Baptist in Denver, CO, and her cherished Sacred Sisters group at Mile Hi Church of Religious Science in Lakewood, CO. Volunteering was always important to Lila whether it was giving manicures at nursing homes or helping mental health patients find halfway housing. At Mile-Hi she studied to become a Practitioner of Religious Science and served on a board helping new practitioners get established. After Jim retired in 1988, Jim and Lila became worldwide cruising enthusiasts, visiting at least 26 countries and 32 states. After Jim died in 1998, Lila made two more dream trips to Australia and China. Lila came to California in 2009 for her daughter’s wedding and decided to stay so she could spend more time with her family and enjoy the pleasant weather and ocean. Lila was a social person who valued her family and many friends and never met a stranger. Her life mission near the end of her life became being happy and making those around her happy, including the dear caregivers who so lovingly cared for her.

A memorial service will be held on Friday, January 18, 2013 at 1:30 p.m., at the InSpirit Center for Spiritual Living, 25782 Obrero Dr., Unit D, Mission Viejo, CA. In lieu of flowers, her family requests that donations be made in her memory to InSpirit Center for Spiritual Living for the Lila Lee Cosby Practitioner Room, Habitat for Humanity (www.habitat.org), or your favorite charity.