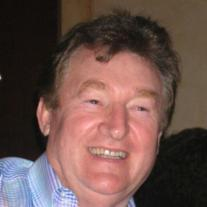 Liam grew up in Cork, Ireland and emigrated to America when he was 16 years old. He started his own flooring business installing linoleum and carpet in the San Francisco Bay Area. He later relocated to the Los Angeles area where he started a water treatment business, Liam Research International. The ideals and drive for success set the foundation for the development of Aqua-Phyd. Liam was the Co-Founder, Chief Technology Officer and major shareholder of Aqua-Phyd.

Liam is survived by his daughters Deirdrea and Fiona, brothers Michael and Noel, sisters Noreen, Teresa, and Phyllis, grand-daughter Brianna grand-sons Devin, Tyler and Shane brother-in-law Ray, sister-inlaw Breda, ex-wife Margie his many nieces and nephews and friends. Liam will be deeply missed by his family he was a star that burned brightly that dimmed too soon. His sense of humor and his unbreakable spirit carried him through to the end.

Liam’s ashes will interred with Military Honors on Thursday, February 23, 2012 at Riverside National Cemetery at 11:45 a.m.

Following the interment, there will be a reception for the celebration of his life at the home of his brother, Noel at 1166 Melville Drive, Riverside, CA 92506.

In lieu of flowers please make a donation to the American Cancer Society.