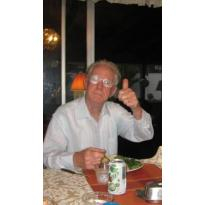 Leo F. Hazell, of Mission Viejo, California died at the age of 79 Wednesday, April 13, 2011 after a courageous and well-fought battle with cancer. Leo was surrounded by his loving wife Elizabeth and family members at the time of his death.

Leo was born on February 2, 1932 in Boston Massachusetts. He was the son of John Halpin of Rutland Vermont and Eileen Hazell Dolan of Waltham, Massachusetts. He relocated with his wife Elizabeth and the first two of his six children to California in 1957 to pursue a new career opportunity in aviation. Leo had an aviation career that spanned 60 years. Leo’s first exposure to aviation was when he got his first plane ride at age 15 as a Marine Corps reservist at Squantum Naval Air Station in Quincy, Mass in 1947.

At the age of 16 he joined the Marine Corps and served his country honorably during the Korean War. He was also an amateur boxer in the Marines. During the Korean War Leo was part of Marine Aviation’s transition from props to jets in the late 40’s and early 50’s. He served in VMF-122 the first military squadron that flew jets at air shows. The squadron went from Corsairs F4U-4’s to Phantoms FH-1 and later Banshees F2H-2. After military service Leo attended Boston College University College of Industrial Technology where he studied for an engineering degree and an A&P license.

After college Leo joined the Columbus Division of North American Aviation as a Field Service Representative on FJ series Fury jets. He served in this capacity providing technical assistance to several Marine and Navy squadrons. Leo first came to California as a civilian field rep working with the Marines in El Toro, Ca in 1957. In the early 60’s Leo worked with Flying Tiger Line on the maintenance staff during the Connie and CL-44 era. Following Flying Tigers, Leo joined Trans International Airlines as a Flight engineer on the Lockheed L-1049H Constellation, recently referred to as the ‘The Connie.’ In l965 when the opportunity came to build the ‘Giant Plane’, Leo joined the Lockheed Corporation in Marietta Georgia in the engineering department as a Maintainability engineer on the C5A landing gear.

When a flight test opportunity became available, Leo joined the flight Department of McDonnell Douglas, as DC8 DC10/DC10 flight engineer. He served as Project Flight Engineer on the KC-10 and participated on first flight. He also was associated with the MD-11 and C-17 and MD-80 flight operations programs. While with Douglas Leo trained flight crews from 44 airlines around the world on the operation of Douglas built airplanes. Leo was in Afghanistan training that airline when the Russians invaded that country in 1979.

Leo the founder and former owner of Hazell Airmotive Service Inc. established a new business at Orange County Airport providing light aircraft maintenance and inspections and as a Dinol distributor and application center. Recently Leo demonstrated FAA proficiency in corrosion and was awarded certification as a corrosion specialist. In addition to being an A&P, IA, F/E Jet and Recip., Leo is a pilot with 41 years flying experience. He has received the FAA technician Bronze award in 1994 and has been nominated for the FAA technician of the year award. In addition to running his business Leo was a contributing writer to In Flight USA and can be read in the column entitled, ‘Shop Talk.’ Leo was also a Cessna and Mooney airplane owner and based his planes at Orange County and Fullerton Airports.

On March 4, 1996 it was back to the big jets when Leo was called to help Freddie Laker get his old airline reestablished with the new routes from Florida to England using DC-10’s.

On December 19, 1997 Leo was called once again to help Omni Air International get started using newly acquired DC-10’s. On July 22, 2003 Leo made his last DC-10 flight and ended an aviation career that spanned 60 years.

Leo was a great family man and the father of six children. Leo served and loved his family in any way he could as provider, protector, disciplinarian, teacher, husband, father and friend. He loved many sports, especially baseball and was an avid Angels fan. During his youth he was scouted by the Boston Red Sox and played on the Boston Red Sox farm team but Aviation won out over baseball as Leo’s career choice. Leo loved taking his family to Red Sox baseball games in Boston when visiting Boston, as well as to Angels games in Anaheim, Ca. He also enjoyed taking his family to the baseball museum in Cooperstown, NY. Leo served as a baseball coach during his children’s youth and loved watching his children’s school sporting events.

Loving the great outdoors, Leo had a great sense of adventure, taking his family on numerous cross-country camping trips teaching his children about nature, the great outdoors, historic sites, and national parks. Leo loved documenting everything with his love of photography and had all the latest photography equipment to do it with. The family once in the l970’s went on a 10, 000 mile camping trip lasting an entire summer which not only included traveling in the United States, but Canada and Mexico.

During the Flying Tiger Years in the early 60’s he wanted the family to be bi-coastal, so often Leo flew the family from California to the east coast in the ‘Connie’ air freighter. Putting the children to bed in bunk beds with racehorses, oranges and strawberries also on board. Life in the Hazell household was always an exciting adventure. He also brought his entire family to live in Rome, Italy in the 1970’s while on a job assignment with AlItalia Airlines. Leo often took his family to visit other numerous countries and loved to travel and share the world and other cultures with them. He taught himself basic Italian and encouraged his family to learn other languages as well. Leo loved to chronicle every trip with photography and continued to do so up until the present, sharing with family and friends via email.

Leo was the original ‘techie’ and was first in line to have all the latest electronic gadgets to enrich his life. Since retirement, Leo had a busy schedule and maintained two web sites for the Elks, serving as an officer in the ELKs and was Chairman of veteran’s hospital visitations. As an Elk, he also participated in golf competitions, gave aviation history and photography presentations. Leo was also an avid RV traveler and was secretary of an RV Club, ‘The Runaways’ and he also worked to rescind the name change of Orange County Airport. He was a member of the Saddleback Valley BPO Elks Lodge 244 where he served as a Past Elk officer, Lecturing Knight and their webmaster. Leo was named Elk of the Year for 2010.

He will also be missed by his grandchildren: Paul wife Amy Patrick, Rachel, Maria, Nathaniel, Sean, Alexandra, Thomas, and Victoria.

A viewing will take place Saturday, April 16, 2011 at 3:00 5:00 p.m. A Funeral Mass will take place Monday, April 18, 2011 at 9:00 a.m. at St. Kilian Catholic Church, Mission Viejo, CA. Burial to follow at El Toro Memorial Park, Lake Forest, CA. In lieu of flowers, a donation can be made in Leo’s name to the American Cancer Society www.cancer.org or the BPO Elks Lodge of Saddleback Valley www.elkslodge2444.org.