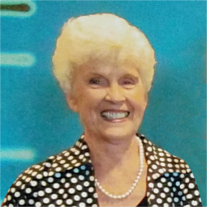 Lenore Wilson, exemplary school teacher, wife, mother of three, and grandmother of nine, passed away September 27 at 1:50 a.m., the day after her 86th birthday.

Lenore Ruth Brenda was born in Bad Axe, MI in 1931, to Frederick and Elizabeth Brenda, who had immigrated from Germany (Elizabeth via Brazil). Lenore was the ninth of ten children. The family moved to the Central Valley of California after the Second World War.

She married Lewis Wilson in 1953. They served as Christian missionaries under the auspices of the Assemblies of God in South Africa for five years, from 1957 to 1962. They took with them their first-born son, Lewis; Elizabeth and Michael were born in Africa.

Returning to the United States, Lenore was the primary bread-winner while Lewis earned his Ph.D. In history at UC Berkeley. The family moved to Costa Mesa in Orange County in 1967, where Lewis joined the faculty at Southern California College (Vanguard University).

Lenore earned her teaching credential from SCC/Vanguard in 1969, and taught in Fountain Valley schools. She gained a reputation for reaching the more challenging students, and eventually was honored as the district’s Teacher of the Year. After retiring in 1993 she supervised teacher candidates in Vanguard’s credential program. She enjoyed book clubs, taking care of her grandchildren, gardening, and painting. She was known for her love of children, her wit, and her Martha Stewart-like hospitality, and class.

She died peacefully in her sleep, succumbing to Alzheimer’s disease after a happy and fruitful life.