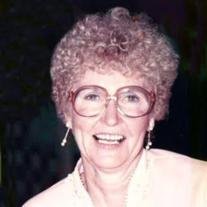 Lena Margaret Hampton, 90, passed away peacefully on Friday, November 11, 2011. Lena was born in Jonesboro, Arkansas on November 16, 1920. She was the sixth child of Max and Ozetta Hockle and grew up on a farm with her eleven brothers and sisters. She married Robert Hampton in Dallas, Texas on August 31, 1945 and they spent 55 wonderful years together before Bob passed away in 2001.

In 1965 Bob and Lena moved to Newport Beach, CA, where they raised their two children, Steve and Beverly. In 1978, Bob and Lena retired to a golf community in San Juan Capistrano where they enjoyed traveling, playing golf, and playing bridge with their neighbors. Lena always found time to volunteer for Mission Basilica San Juan Capistrano where she regularly attended Mass.

In lieu of flowers, donations in Lena’s name may be made to Mission Basilica San Juan Capistrano.