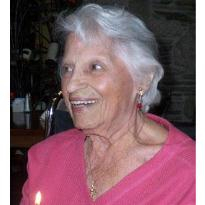 Lena was born on August 5, 1921 in Pittsburgh, Pennsylvania to the late Philomena and Francis Petruzzi, immigrants of Italy. Her only surviving sibling, Virginia Illinicki, resides in McKees Rocks, Pennsylvania, and her other six siblings are deceased. Lena was widowed in 2001 with the passing of her beloved Bernard Ben Stanley Rolewicz. Lena had three children. She is survived by daughters Donna Jimenez and Tina Rolewicz. Her son, Bernard Rolewicz, is deceased. She is also survived by a son-in-law and daughter-in-law, 7 grandchildren, and 11 great-grandchildren. Lena loved her family deeply.

Lena was a homemaker and being of Italian heritage was both the matriarch of the family and a wonderful cook. She loved watching the Food Network and trying out new recipes. She stayed young by solving word search puzzles and watching American Idol. Her sense of humor kept us all laughing, and if you were so lucky to be on the receiving end of one of her famous ‘slaps’ you knew you were part of the family. Even after moving to Orange County 11 years ago, she was a die-hard democrat who once said, ‘Every time I see George Bush on the T.V. I flip him off!’ This came with a pause and then much laughter once we realized she meant she ‘flipped him off’ by changing the channel with her remote control channel flipper.

Lena had many health challenges in the past few years and went to hemo-dialysis 4 days per week where the Davita Dialysis staff became a part of her extended family. Our thanks to our many family and friends who supported her until her body just wore out. Lena had a long and blessed life and will be greatly missed.

The Funeral Service will be held at O’Connor Mortuary in Laguna Hills on Tuesday, November 9, at 10:00am. The Burial Ceremony will be held at Riverside National Cemetery at 1:00pm. A celebration of Lena’s life will be held for friends and family at 5:00pm that evening.