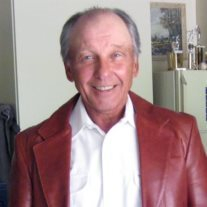 Leland Thomas Leslie, 64, of Mission Viejo, California, passed away the morning of Wednesday, March 26, 2014. He is survived by his wife, Marilyn Leslie; his son, William; his younger sister, Billie; and his four grand-children. A celebration of life service will be held at 10:30 am, Monday, March 31 at Mount of Olives Lutheran Church, 24772 Chrisanta Drive in Mission Viejo.

He was known by most as ‘Lee’ but his family called him ‘Tommy’. He was born in San Diego, California, on April 7th, 1949 and was raised in Chula Vista, California. He had one of those personalities that made it easy for everyone to love him: He was a great role model to his family and worked diligently to achieve success in all aspects of his life. He was an avid fisherman and often spent his time on Lake Mission Viejo, where he caught award-winning bass that he could be seen smiling with in Bassmaster magazine. Leland was one of the most giving people you’d ever know. He never gave anything but the best to his family and made sure to establish deep relationships with everyone despite any distance. Leland will never be forgotten by those who survive him. We love him so much and he will be deeply missed until we are all united with him once again. May he rest in peace with God and Tommy to live happily in eternity.