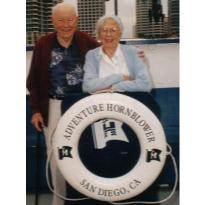 Lee Owens passed away at Regents Point, Irvine, California, on March 2, 2011. Lee and her husband Harold came to Regents Point in July 2003 from Fairhope, Alabama where they had lived in recent years. Lee spent her childhood in Minneapolis, Minnesota. She attended Stephens College in Columbia Missouri, where she studied science, literature and art. Lee met Harold, a University of Missouri student, during their college years. Lee continued her studies in home economics and business, graduating from the University of Minnesota. Just after World War II ended, Lee and Harold married and moved to Missouri.

Her personal and professional interests were many and varied. She attended the University of Missouri School of Library, followed by positions as Children’s Literature Librarian and Reference Librarian at Stephens College. After moving to Washington D.C., she served as Librarian for the American Home Economics Association. She pursued a lifelong interest in photography, from having pictures published in the college yearbook to a three page series in the Washington Post. She belonged to the American Society of Picture Professionals. Lee was known for capturing the true essence and personality of her photographic subjects.

Lee and Harold’s travels included a three-year stay in South Africa. Lee described her work there as ‘seeing Africa through the lens of a camera.’

Lee is remembered for her welcoming love of people. She was preceded in death by Harold, her husband of 62 years. She is survived by sister Elizabeth Benjamin, daughters Christine McLaren and Julianne Owens, grandson Graham McLaren and great grandchildren Yarrow and Coyote Herrera McLaren.