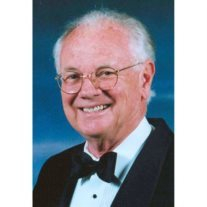 He was born in Inglewood, California on October 7, 1929 to Nell and Samuel Massengill and was married to the love of his life, Barbara, for 64 years.

Tony received a Bachelors of Arts degree in Business from Upper Iowa University, was a veteran in the US Army Air Corps, and enjoyed a career that spanned 40 years in the aerospace and defense industry. He retired at 59 as VP Sales and Marketing and traveled the world with Barbara, family and friends.

Tony was an automobile and aircraft enthusiast, owning dozens of different, and often unusual, makes and models of cars throughout his life.

Tony was an avid historian and published author in both periodicals and newspapers, on topics ranging from WW2 battle strategies to social issues. He served for 15 years in leadership positions in the Lions Club.

Tony was preceded in death by his son Lawrence Massengill Jr. and is survived by his wife Barbara; his daughter Susan (Frank); sons Mark and Matthew (Bernice); his 6 grandchildren Carolyn, Alex, Samantha, Gabriel, Cassidy and Noelle; and his 7 great-grandchildren Luke, Matthew, Gianna, Breanne, Derek, Cody and Ryan.

Funeral services will be held at St. Edwards the Confessor Catholic Church on August 14 at 11:00 AM with a reception immediately following the Mass at San Juan Hills Golf Club.

2 responses to Lawrence A. Massengill